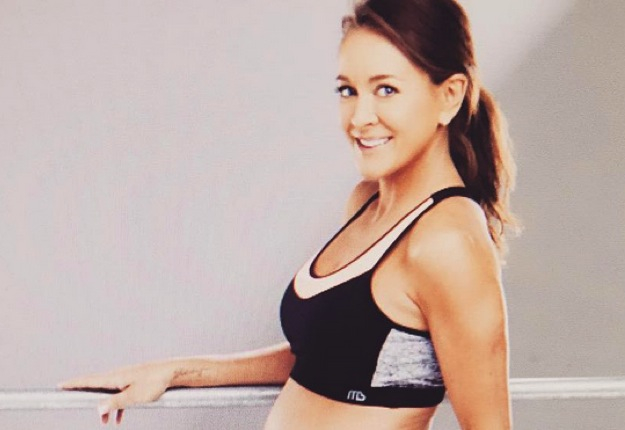 Michelle Bridges has hit back at her critics during an appearance on Friday’s Today show.

Receiving a lot of backlash for exercising during her recent pregnancy, the Biggest Loser star has claimed her routine workouts definitely ‘helped’ ahead of the birth.

‘It’s not dangerous, of course not,’ she explained on the show. ‘If you exercise, there is no reason why you can’t continue with that unless your doctor says so.  People think, “Oh my goodness she shouldn’t be training.” It’s my job, it’s what I do for a living and while I was pregnant I kept dialling down the intensity and duration.  There were days when I didn’t do anything at all,’ she added. ‘There are still some days like that now. I’m like any other woman who has had a baby three-and-a-half months ago.’

Australia’s ‘Queen of fitness’, welcomed baby Axel into the world with partner Steve ‘Commando’ Willis in December.  Michelle also revealed during the interview that mulitasking with a baby can be a bit of a struggle, but explained how ‘extremely hands-on’ Steve is in helping raise young Axel.

‘Steve already has three other beautiful children,’ she said. ‘So he can be sterilising bottles, vacuuming, making the bed, putting a load of washing on – he’s unbelievable. He’s very old school army.’

The celebrity personal trainer also revealed her latest expansion to her flourishing fitness empire.  The TV star has joined forces with Sony to launch her own CD workout playlist, called Booty Blitz Trax which is to be released this month.

‘Thanks to Sony and their amazing artists that have given their approval to put these tracks together to make what I think is a fantastic workout album,’ she continued.  ‘I handpicked the first CD with fast music, so great to workout with, great for running and high-intense cardio training.  The other is a little slower, great for weights and to dance if you want.  Music makes people move, we know it when we are training to a thumping, awesome song.’

Booty BlitzHey guys, I am so excited to share this with you finally!! It isn’t released for another week but thought I’d show you, the commercial I shot for my new #BootyBlitz album with #Sony. Thanks to the gorgeous Yvette DeStoop for helping me out on the day, as I was heavily pregnant at the time! You can get your pre ordered copy here http://www.michellebridges.com.au/sbb/ there are some really great tracks on here with not only Australian Artists but Global too.

The music compilation will feature hits by Sia, Dami Im, Jessica Mauboy and Samantha Jade, as well as international artists including Britney Spears and Coldplay.