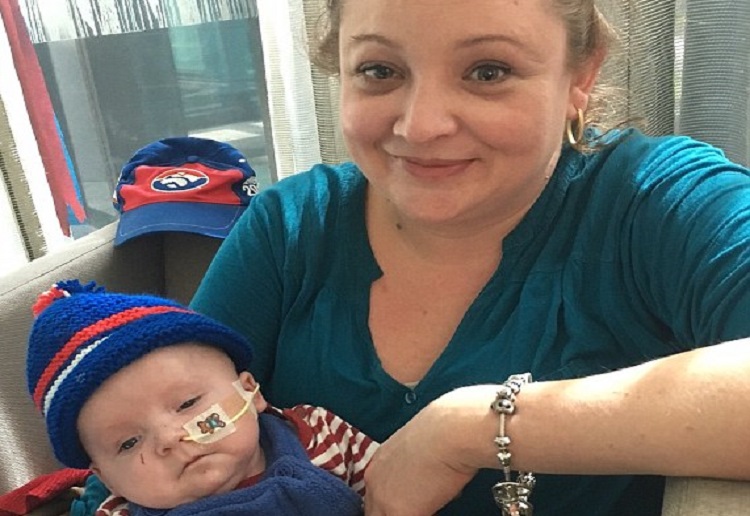 Mum of little boy with weeks to live vows to make every second count.

Melissa Lovf was told at her 12 week pregnancy scan that her unborn baby had a heart problem.

She was induced in June 2016 and gave birth to a little boy, affectionately known as Mikey.

Doctors are now saying the four-month-old has just weeks – and at most months – to live, reports Daily Mail.

‘We were lucky this surgery was a success, but more surgeries were to come,’ Melissa’s sister Nicky O’Keefe wrote on a Go Fund Me page for Mikey’s family.

‘There were steps forward and back, and other surgeries involved putting in a shunt, some work on his diaphragm, and to clean out an infection that had developed.’

While Mikey was eventually discharged, soon we was struggling to keep his feeds down. Scans showed a narrowing of Mikey’s veins and it meant he required more surgery.

‘There was nothing else that could be done for Mikey, except to make him comfortable. The guide they gave is a few months at most,’ Ms Lovf told Mamamia.

‘The news broke us. Our little boy Mikey, who was so full of life and just starting to show his personality, was out of options.’

She went on: ‘I do not regret having Mikey, as whilst he had a chance at a good-quality life, we fought for it.’

Now the family from Melbourne, Vic, is determined to make a lifetime of memories in the time they have left but are in need of help to make it happen.

‘Going to Zoo’s aquariums and other adventures also adds up, not to mention hospital parking costs, and medications. While we are trying to focus on making happy memories, we are aware of funeral expenses as well,’ Ms Lovf’s sister wrote on the crowdfunding page.

‘So many people have offered to help in any way they can, and to everyone, we say thank you for your love and support.’

Congenital heart disease is the greatest killer of Australian children under one and every day in Australia eight babies are born with a heart defect. Sadly, every week four precious lives are lost.

As a heart mum myself this is shattering. We wish little Mikey all the best. You can read my story as a heart mum here.

Heartkids Australia is a great resource for any families in need. HeartKids Information Line  1800 432 785.