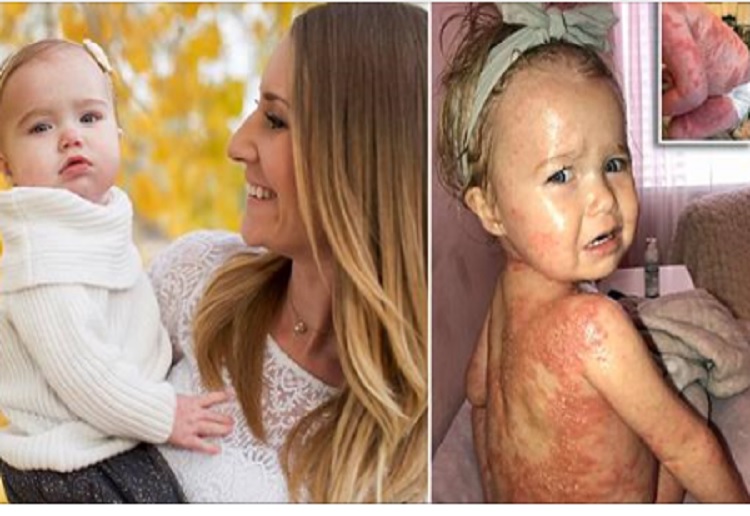 ‘It’s NOT contagious': Mother shares heartbreaking photos of her psoriasis-suffering toddler as she pleads for parents to stop dragging their children away in fear.

Ashley Nagy, 29, has shared photos of 19-months-old Charlie to raise awareness of the skin condition after revealing parents drag their children away from her in case they catch something.

She also explained how her and husband Andrew, 32, have been accused by strangers of letting their daughter get ‘severely sunburnt’, reports Daily Mail.

The mother-of-two from Queen Creek in Arizona, US, says ‘Strangers can be very cruel about it, when we’ve taken her to the playground the parents of other children have dragged their kids away thinking she’s contagious,’ she said.

‘Most people move away, afraid they are going to catch whatever she has or move their kids away so she can’t get to close or play with them.

‘My response is normally to pick Charlie up and kiss her so that people can see she is not contagious and being near her isn’t going to hurt anyone.

‘A few people have made comments, some ladies said that I was a bad parent and couldn’t believe I let her get so sunburned.

‘Others have said they can’t believe we have her out in public, but these are just very ignorant people so we ignore them.’

The little girl was diagnosed with psoriasis at four-months-old after the small red dots that appeared all over her skin, developed into large welts that would peel and flake off.

The disease that affects more than 125 million people worldwide and flare ups are often brought on by stress, illness and food intolerances.

Ashley said: ‘Psoriasis flare-ups happen sporadically, she’ll be completely free and then in a matter of hours her skin will be covered from head to toe.

‘They start off as wide, raised, red spots that then look like little whiteheads, after that they dry up to flake, crack and peel from her body.’

Charlie was two months old when she had her first psoriasis flare-up. Doctors believe she is one of the youngest patients to have such a severe case.

Ashley said: ‘The rash on her stomach looked like tiny little dots and despite getting antibiotics and more it didn’t seem to clear, only getting worse.

‘We were told she was one of the youngest patients with psoriasis that the dermatologist had ever seen.

‘Flare-ups can be caused by food, stress, skin trauma to many different things, even teething and toothache has caused her whole body to flare-up.’

Due to the rarity of little Charlie having such an extreme form of psoriasis at such a young age, her parents nickname her their ‘unicorn baby’.

They hope their cute phrasing will help to show others the disease is not something to fear.

I have shared before about my horrible experience with Psoriasis after suffering with a throat infection. Read about my journey here.