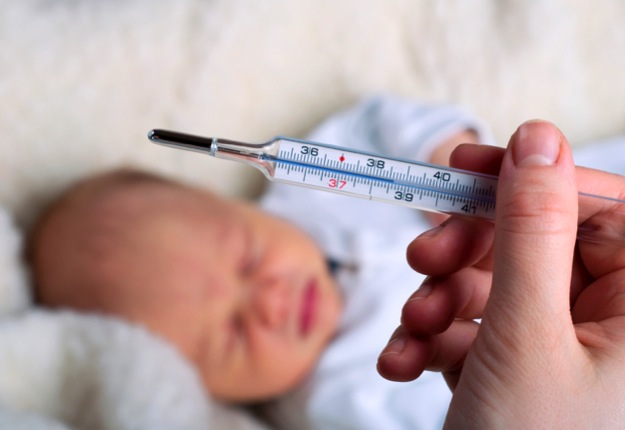 As I sit here writing this, the baby is finally asleep in her cot after having extricated her tentacle like limbs from my body (I swear she is part octopus).

My older two are firmly entrenched in the bedroom watching Channel 22. It was the first number they learnt as toddlers and it fast became my favourite number at 5 o’clock in the evening.

Here is my epiphany for today…

I have found a new way to come up short as Mother of the Year.

This morning, I took my twelve month old to the doctor for her immunisations. The nurse took one look at her and asked if she had been feeling well.

I was on the ball enough to say that immunisation day would most likely have to be postponed because she was really suffering from teething combined with a cold.  But I didn’t want to assume so I had kept the appointment.

Teething and a cold? Not quite.

Ten minutes later, I was being told that my baby was suffering from tonsillitis, we were being taken down to X-ray to see if she had developed pneumonia and swabs were being taken from her eyes to be sent to the pathologist to check if we were going for the triple whammy or just the double.

I drove home searching the recesses of my mind for any type of the sixth sense parents talk about.

Was I not supposed to know “in my gut” that something was wrong?  Was there not some sort of alarm that was supposed to sound in my ear to tell me that my daughter needed a doctor?

Of course I knew she wasn’t well.  She was clingy and off her food. But her eldest sister had had a cold the previous week.  It had passed through her second sister as well so I immediately assumed that the baby wouldn’t be able to escape it.  I thought a little cold would be a good immune builder for her.  I didn’t want to run off to the doctor just because of a sniffle.

Combine this with the fact that she had finally popped one of her bottom teeth and the rest of her gums were doing a good impression of a treeless mountain range. Teething is cruel, but once again, not doctor-worthy.

Intuition. Intuition.  Where for art thou, intuition?

You hear mothers saying when they have received an unwelcome diagnosis, “I just knew. I knew something wasn’t right.  Call it mother’s intuition”.  Well my mother’s intuition must have been left at the hospital.  Maybe it had been thrown away with the placenta.  Maybe I didn’t see the sign “Collect intuition here” as I left the hospital with my newborn. My husband does tell me that I sometimes walk around with my head in the clouds but I doubt they have second helpings up there for me to grab.

Maybe my intuition was being dulled by the fact that a doctor’s appointment can take up to 5 hours out of my day.

A 45 minutes to drive from our family cattle property to our local town.  An hour, if not two, of waiting to be seen by the doctor (I have waited in excess of 3 hours on one occasion).  30 minutes for the actual consultation (unless extra tests are needed).  And then another 45 minutes to drive home.

I need to organise 3 kids.  I have to pack smoko and lunch, trying not to forget the waterbottles.  I need to make sure I have nappies, wipes, a spare set of clothes (for each child) and the bloody red book (Queenslander thing).   I do need to clarify, however, that the doctors at our local medical centre are freakin’ FANtastic and I would wait a whole day if I needed to.  But for a cold and excess teething??

Maybe it is because I have been desensitised to injury and illness by my two hypochondriacs in the house.

My older children almost thrive on being ill. I am at a loss to explain this phenomenon.  Surprisingly, these ailments always tend to appear when it is ‘clean up your room time’.  And they always seem to disappear as soon as you mention that they can’t go to kindy/daycare or that they can’t go swimming or have a treat.

Maybe my intuition has gone on sabbatical? The problem here is for it to go on sabbatical; it had to be at work in order to require the timeout.  My lazy intuition didn’t even go for the job interview so I can’t see why it should be on extended leave.

I really hope it puts in an application before my girls are teenagers.  I’m not sure if will be intuition at work or the conspiracy theorist in me that will have me donning dark clothing and black war paint as I stealthily sneak into their rooms during the night to make sure they are still in their beds (and on their own).

Luckily for me, my husband is a grazier and graziers own guns.  Maybe I won’t need mother’s intuition after all.