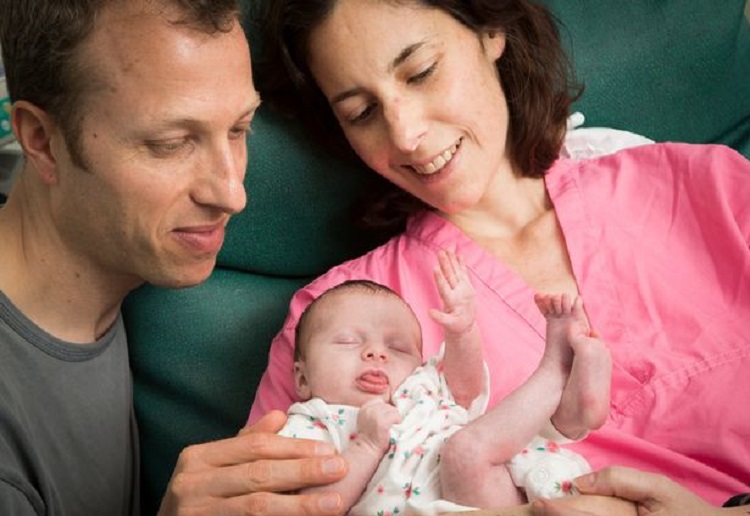 Mum died just weeks after giving birth to her baby girl because her pregnancy masked the symptoms of terminal bowel cancer, reports The Mirror.

Laurel Cohen, 38, died 10 weeks after giving birth to her daughter after thinking her abdominal pain, shortness of breath and constipation were normal signs of pregnancy.

Laurel, an occupational therapist at the oncology ward of University College London Hospital was healthy at every check-up and prenatal scan.

But in her 35th week of pregnancy, the pain in Laurel’s abdomen got so bad she stayed off work and she was eventually admitted to London’s Royal Free Hospital on May last year.

What doctors had originally thought were extreme side effects of pregnancy were found to be the consequence of a huge lump on Laurel’s liver.

Four days later Dave’s wife of five years was taken in for a caesarean and daughter Ruby, born five weeks premature, was whisked off to neo-natal care just moments before surgeons biopsied her mum’s tumour.

Biopsy results confirmed Laurel was suffering from terminal bowel cancer that had spread to her liver – and she passed away just ten weeks later, on July 26 last year.

“Nothing could have prepared us for it. After her death I so wanted someone to blame but the doctors did everything they could. Every symptom she had was so easily explained by her pregnancy.

“Looking back now those last weeks are all just a blur of running between neo-natal to be with Ruby and the cancer ward to be with Laurel.

“I still miss her every single day. It’s been a year of firsts – the first time I am having to do so many things on my own. But Ruby gives me strength.”

The new mum recorded voice messages for Ruby and endeavoured to write birthday cards up until her daughter’s 10th birthday – but sadly got too ill before she could finish.

Dave said: “Whenever the bad news was delivered we would have a big cry and talk about how terrible it all was but then Laurel would redirect and we’d be back onto Ruby’s future.

“Laurel was so strong and so calm. She was always the more level-headed one. I was just trying to take one day at a time and cherish every last moment.

“And I was also trying not be overwhelmed by the fact I had a new baby and absolutely no idea what I was doing – but the nurses and our families have been unbelievably supportive.

“I worry a bit about how I’m going to deal with helping her do her hair or talking about puberty and boys but we’ll manage.”

We wish Dave and Ruby loads of strength.