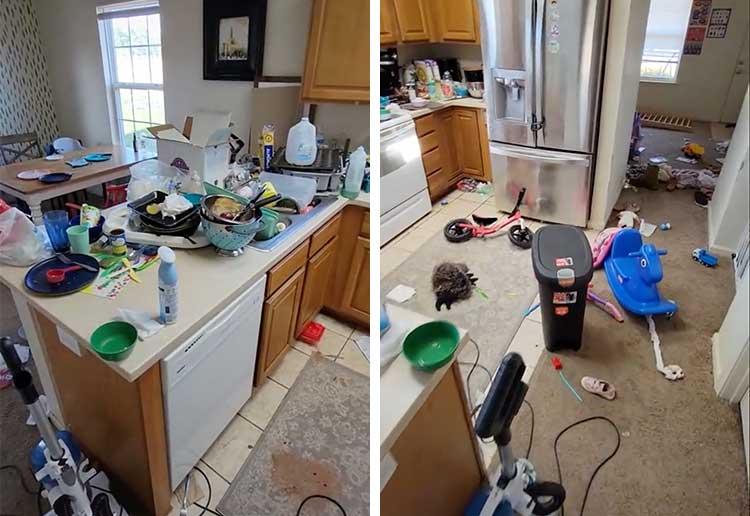 A mum-of-four has made a brutally honest admission, revealing the messy state of her house after four days without cleaning.

Bri James, who has a TikTok account called themessymama4, admits she knew uploading the eye-opening video would attracte negativity. But she wanted to show the reality of being a mum and becoming overwhelmed by the mess.

“I know I’m going to get roasted, I know it. But, this is what happens when two really lazy adults have four kids and don’t clean up after themselves,” Bri says in the voiceover.

“I have not done dishes or picked things up for four days and this is what my house looks like. It is not dirty, it is simply messy.”

@themessymama4I will block those who are mean. this is to keep me accountable not for views.

Bri says she uploaded the video, which has been viewed more than 12 million times, to keep herself accountable and not for views.

“Obviously I’m not going to post a really crappy video of my house being a mess and not post a video of me cleaning it.”

The mum then uploaded a series of videos, as she tackled the mess in her home. The time-lapse footage shows her clearing floors, stacking the dishwasher and trying to get her kitchen back in order.

While her videos have been flooded with supportive comments and offers of help, others have been scathing.

@themessymama4
my butt does not look flattering in these Walmart lounge pants ????????‍♀️????

“It’s so much less daunting when you work on it every day instead of not lifting a finger for four days and then trying to clean the chaos,” said another.

But Bri takes it all with a grain of salt, and says reading the comments are ‘fun’.

“I really do only post it for accountability. I don’t post it for the views. I post it because I know people will see it … and they’ll comments and I’ll think ‘that’s a good idea’. Or just people seeing it in general will force my mind. I feel like company’s coming over.”

Make sure you check out our other article on TikTok Messy Homes.

Do you clean every day, or do you let it go for a few days? Let us know in the comments below.