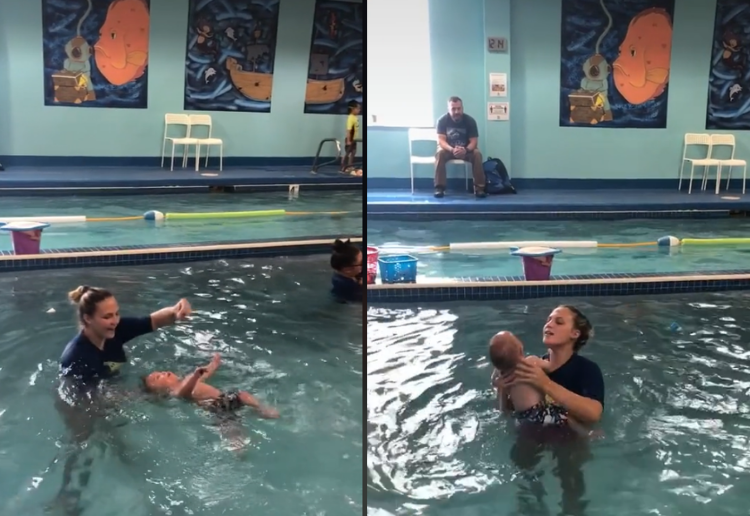 One Mum has had to defend her choices after posting a video of her child on TikTok taken during swimming lessons. The video has been watched by millions of people and has divided opinion on the best way to teach children how to swim.

American mother of two, Krysta Meyer recently posted a video of her son Oliver taken during his swim survival class Little Fins Swim School in Colorado Springs. Eight-month-old Oliver, who is in full care of his instructor, is thrown into the pool and allowed to come to the surface himself and kick to keep afloat. The instructor slips into the pool after Oliver has been thrown in.

@mom.of.2.boyssSince tiktok wanted to remove this for violating guidelines. ???? please do your research before reporting or removing♬ original sound – mom.of.2.boyss

Ms Meyer reposted the video after it was taken down by TikTok. Her original post, which had more than 70 million views, gushed over how amazed she was by her baby’s ability and how he was “a little fish”. The updated video and caption reads “Since tiktok wanted to remove this for violating guidelines. ???? please do your research before reporting or removing”. Her original post has now been restored.

Since posting the video Krysta has been bombarded with death threats and hate comments such as “Lil man’s not swimming, he is fighting for his life” and “Ur drowning the baby”.

Krysta’s aim of posting the video was to ‘educate’ people on how you can teach a baby to flip over if they fall into the water. Motherly spoke with Krysta who said “I get it, it looks bad. It’s not for everyone” though Krysta also mentioned she is glad that the video is encouraging people to think about water safety and could potentially help save lives.

Motherly also spoke with Laurie Armstrong, the owner of Little Fins Swim School who said “Our instructors are highly trained and we provide constant ongoing professional development training and skills workshops to keep up on all the latest safety information and skills. In the video, Ms. Jill tossed the baby in the pool. We do this as part of our safety and survival level to pass, because when kids fall into water, it’s not always graceful or pretty. It can be a disorienting experience.”

The video has also been posted to several Facebook pages with many commenting on how ‘awful’ the video is, that ‘scaring babies is not teaching them how to swim’.