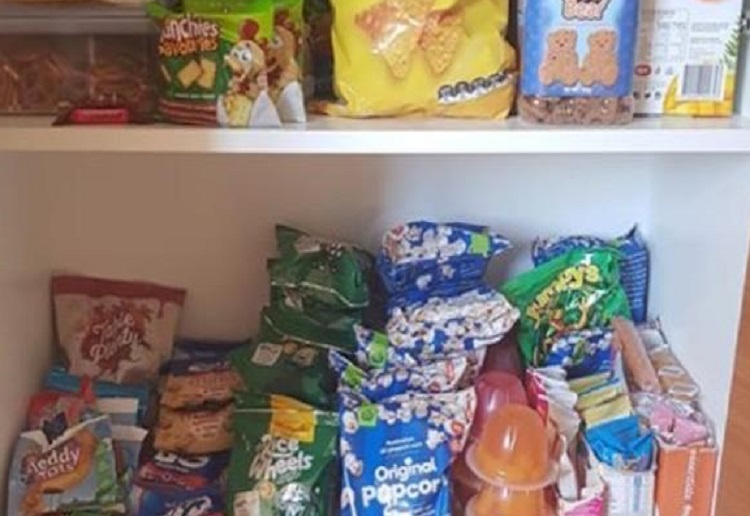 Mum shamed online after asking for advice on how to store her toddler’s snacks in the pantry.

Carlie, who posted the photograph to a Facebook group, asked what the best way was to store snacks for her son and husband.

But instead of receiving advice she was shamed over her food choices. 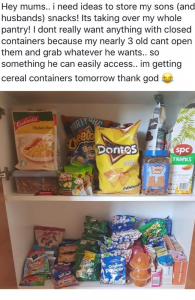 – “In todays day and age with so many overweight and unhealthy kids, it’s not good to see so much junk being fed to them,” one person posted in response to the photo.

-“Eating healthy is actually so much cheaper and really not that hard,” another added. “Especially just for simple snacks. I used to be 103kg because of the sh*t in this photo and my lack of my parents teaching me and buying the right foods.

-“If she’s too busy to feed a 3-year-old a banana instead of letting him help himself to a pack of chips then maybe she shouldn’t have a 3-year-old.”

Speaking to news.com.au, Carlie said she was “super surprised” by the reaction to her photo, especially considering she was simply asking for storage advice.

“I wasn’t too offended, everyone is entitled to their opinion,” she said.

“It was a snap shot into my son’s and the rest of my household’s snacks. They didn’t see inside my fridge, my fruit bowl and freezer.”

“Some mothers just have very strong opinions and that’s fine for their household, but every family is different. “They may not agree with what I do and that’s fine, but mothers should build each other up not rip into each other.

“But that’s the world we live in unfortunately.”

When will the mum shaming end?