Article Mum Shamed for Breastfeeding in Front of Older Child 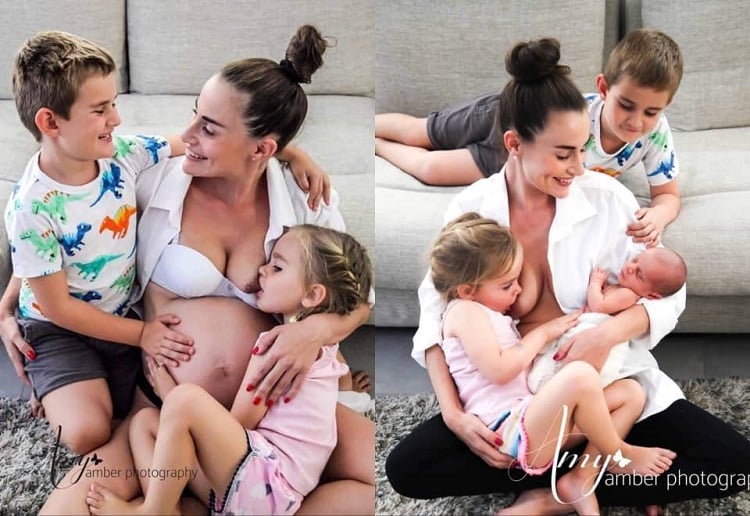 A mum-of-three has revealed how she’s been criticised for feeding her baby, and three-year-old daughter, in front of their older brother.

Irina Naumova, 33, first received the criticism after sharing a snap of her breastfeeding her middle child, then three, while pregnant with her third, and as her eldest son (now 6) looked on.

“Some wrote that I must be sick in the head to have photos like this taken, that I shouldn’t be a mother and that my kids will grow up with problems,” the mum told the Daily Mail.

One mother wrote: ‘I’m all for breastfeeding but having an older boy standing next to his mum with her boob out for her three-year-old is kind of creepy.’

‘You are sick! The maximum it’s two years!! God forbid which kind of a mother you are?!’ another wrote.

Irina has since given birth to her son Leo and now feeds both her newborn and her toddler at the same time.

‘Some wrote that I must be sick in the head to have photos like this taken, that I shouldn’t be a mother and that my kids will grow up with problems,’ she explained. ‘All because they didn’t like the fact I was breastfeeding my three-year-old.’

She tells Daily Mail, ‘I’m proud of myself for breastfeeding my babies and feel it’s important to spread the word about how good and healthy it is to breastfeed whenever possible,’ she said.

‘I was amazed at how nasty some of these women were being – shocked that fellow mummies would be so critical. I wasn’t upset, just genuinely surprised,’ Irina explained.

‘The comments don’t bother me,’ says Irina, who’s since had a second photo shoot done where she’s breastfeeding both Leo and Anastasia at the same time.

‘It’s sad, as I think people who make comments like these will probably never change their minds, but there are so many others who’ve been genuinely curious about tandem feeding and breastfeeding during pregnancy and messaged me to ask questions.

‘I’ve actually set up a separate FB page, Moo Moo Time, now for anyone who’s interested in finding out more or sharing their own experiences.’

Looks very natural to us!