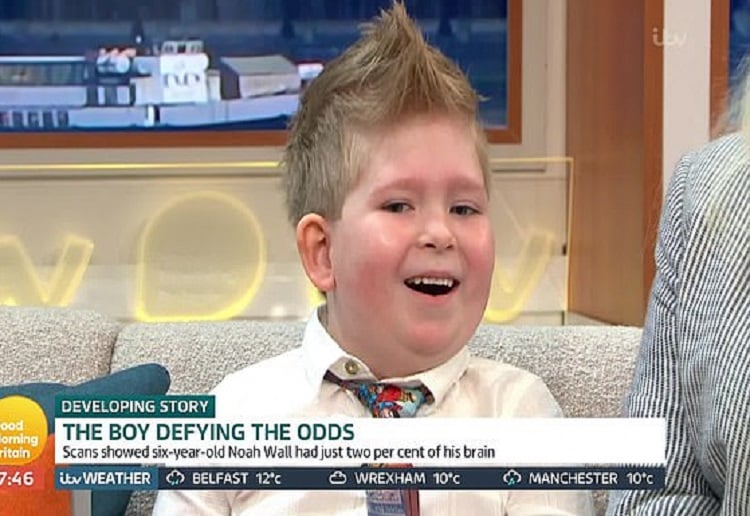 The mother of a boy who was born with just two per cent of his brain has spoken of how her ‘extraordinary’ son defied the odds.

When Shelly Wall, of Abbeytown in Cumbria, developed a rare condition called hydrocephalus in the womb, she and her husband Rob were told on five different occasions that they could terminate the pregnancy.

When their son Noah finally came into the world in 2012 doctors found he only had two per cent of his brain.

They were desperate to give their boy the chance of a healthy life – but had no idea if he would even survive, shares Daily Mail.

Miraculously he kept on growing, and so did his brain, which by the age of three, scans showed had grown to 80 per cent capacity.

Now at the age of six he has learned to talk and is hoping to be able to walk, surf and ski with the help of a pioneering clinic in Australia.

The family-of-three appeared on Good Morning Britain, where the Walls described their son’s progress as ‘extraordinary’.

‘Other people say it must have always been there. But if it was and squashed up it would have been so severely damaged he would have been very mentally and physically disabled.’

Mrs Wall described their experience with doctors, saying: ‘Before he was born they gave me the option of a termination five times.

‘We got taken into a room and they drew a circle saying ‘this brain will only be half a brain’.

Mr Wall replied: ‘We were older parents, if younger people were offered that choice they may have felt pressured to go through with it, but we know our own minds and we are positive people.

The couple have been given an assessment a pioneering Australian clinic, where medics combine physiotherapy and cognitive training to ‘train the brain’.

He is confined to a wheelchair but with the help of the clinic hopes to try out some of his favourite sports.

Mr Wall said: ‘Usually they don’t do it for children. But we are incredibly lucky to have got an assessment.

‘The brain’s ability to heal and correct the body’s nervous system is amazing.’

Although Noah faces a lifetime of operations, he and his parents remain determined to fulfill his dreams, and seeing him walk is their ultimate goal.