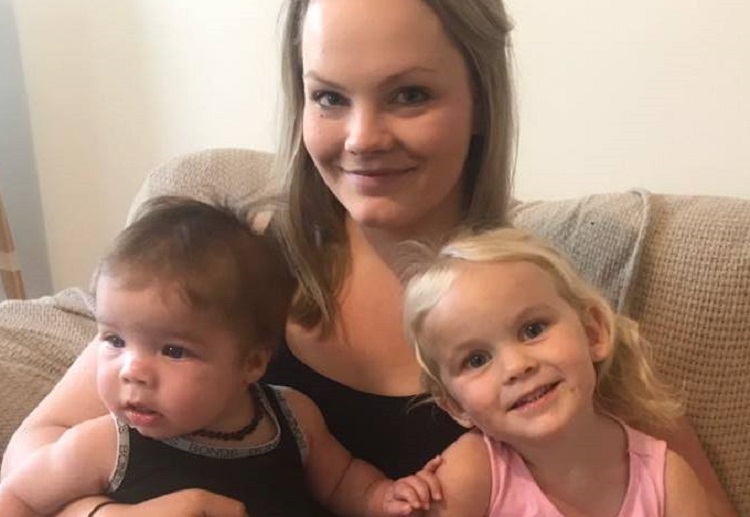 Mum who lost her sight, hearing and all feeling from the waist up during ‘hellish’ caesarean birth says ‘I thought I was dying’.

Kacey Butterworth, from Canberra, was admitted to hospital, believing her waters had broken at 39 weeks pregnant.

The 23-year-old had planned to welcome her second child via water birth – but her plans went horribly wrong.

Doctors discovered her waters were still intact, but the baby was transverse and its heart rate abnormally low.

‘Because bub was sideways, if my waters had of broken the cord could’ve come down before the head,’ Ms Butterworth told Daily Mail Australia.

‘The doctor said that if it had happened, the cord would’ve been crushed which would’ve killed bub and it could’ve caused major issues for me too.’

Ms Butterworth and her husband Tim made the heartbreaking decision to opt for a caesarean delivery.

‘We were just mentally and emotionally exhausted,’ she said.

Doctors inserted a spinal block, but the young mother became violently ill after suffering an incredibly rare reaction to the anaesthesia.

‘When you have a general anaesthetic for surgery, you have the gas mask which puts you to sleep and then you are given a medication to help your organs slow down for the procedure,’ the mum told Kidspot.

‘The opposite happened for me. The spinal block went up, instead of down. It hit my brain, causing my lungs to slow down.

‘It also explains the loss of sight and hearing and why I could feel everything from waist down, but not up,’ she went on. ‘I felt like I was in hell.’

‘I was scared. I had no idea what was going on,’ Ms Butterworth told Daily Mail Australia.

‘It started with a pain in my leg… Then my arm started hurting, (it) felt like someone was stabbing me all over my left arm.

‘Then I started getting fuzzy sight and my hearing started to go. I felt sick and felt my heart racing, then I started fitting and vomiting.’

‘My chest started feeling like I was being crushed on the table. That’s when I started panicking because I was struggling to breathe and I was fitting a lot – I thought I was dying.

‘Then I heard them call out that it was “code red” and I needed to be put under a general straight away. They placed the mask over my face, telling me everything would be OK.’

Ms Butterworth woke up in recovery and was wheeled to the special care nursery to see her son.

‘It was honestly the most relieving feeling. I can’t really put it into words. Just feeling his skin touch my skin and looking down at the tiny little human being that my husband and I had created was amazing.

‘When they put me under the general anaesthetic, I didn’t know what was going to be once I had woken up.

‘So just holding him, knowing that we were both okay – that was the best feeling in the world.’

An anaesthetist later explained what had gone wrong in theatre.

‘(My reaction) was purely just an unlucky situation and the chances of it happening was a 0.086 per cent chance,’ Ms Butterworth said.

What a terrifying experience!

Read info on the Risks and complications of anaesthesia here.