Article Mum Turns to YouTube When She Goes Into Labour Overseas 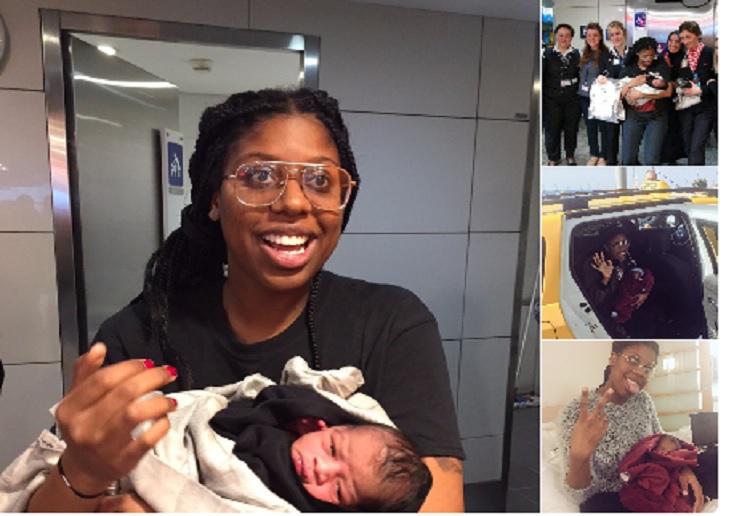 Mum becomes internet famous after her friend revealed on Twitter that she’d delivered her own baby boy during her overseas travels.

Tia, 22, told Yahoo Lifestyle that she flew 14 hours from Nashville to Istanbul, despite being in her third trimester, but didn’t attract any attention from the flight crew because “she didn’t really gain much weight.”

Tia’s travel plans included a 17-hour layover in Istanbul before flying on to meet her friend Jakob in Germany. According to a Twitter thread she posted about the delivery, she started cramping about an hour before landing in Turkey but attributed this to a possible case of food poisoning.

The pain intensified as she went through customs at the airport, but even after consulting Google, Tia was still unsure if she was going through labor or having a false alarm. Either way, she was determined to not “give birth on the airport floor.”

“So in true millennial form I decided to YouTube [how to deliver a child],” she tweeted. “If no one else had my back the internet would! So here my a** is in my hotel room all by my lonesome learning how to deliver my own baby.”

She filled a bathtub with warm water, grabbed towels (including one to bite into), tried out some prime childbirth positions, and used the timer on her phone to keep track of her contractions. Before long, her baby boy, Xavier, entered the world.

Cutting the cord involved more Googling, boiling water in the in-room teakettle to sterilise her shoelaces to use as a makeshift clamp, and using her own knife to make the cut.

“I had to apply for a certificate of birth abroad with the embassy, and they issued that to him along with an emergency passport for him to travel. It cost about $200 and took about a week to get everything done.”

Mother and baby — who is now 7 weeks old — ended up skipping Germany and flying straight back to the U.S. Although they’re now settled back in Nashville, their Turkish adventure won’t be forgotten.

I know there are a lot of negative news right now but….This thread is the MOST AMAZING STORY of my friend Tia and how she delivered her baby.

THIS IS STUFF FOR A MOVIE and I NEED EVERYBODY TO KEEP RETWEETING THIS!

I will say that going to the hospital afterwards the process was very invasive. If I have another child it’ll probably be a natural birth at home with a midwife or something similar. I got to bond one on one w/my son this way. It wasn’t planned but I’m glad it happened that way.

I know there are a lot of negative news right now but….This thread is the MOST AMAZING STORY of my friend Tia and how she delivered her baby.

THIS IS STUFF FOR A MOVIE and I NEED EVERYBODY TO KEEP RETWEETING THIS!

Wow! What an amazing story to share with her little man when he grows up.