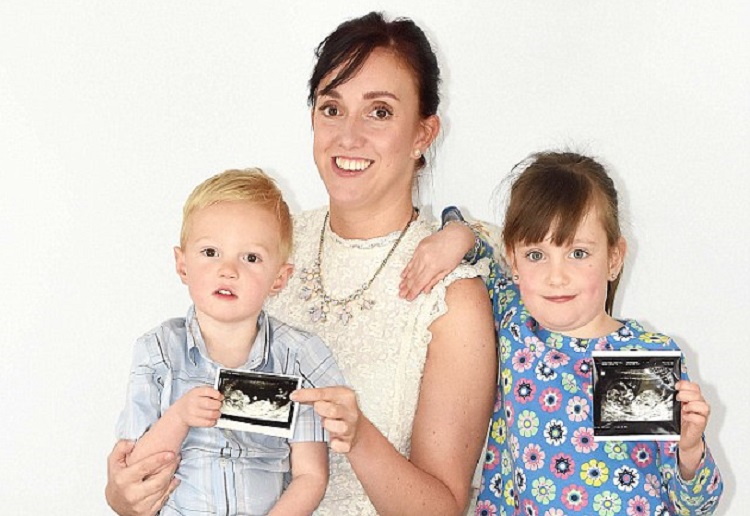 A mother born with two sets of reproductive organs has spoken about how her two children were conceived in separate wombs.

Faye Wilkins, 31, from Plymouth, was diagnosed with a rare condition called uterus didelphys – causing her to have two sets of reproductive organs.

Doctors warned Faye that her chances of carrying a baby to full term was minimal but miraculously, after six miscarriages, she went on to have two children, Molly, seven and George, two – one in each womb, reports The Daily Mail.

Ms Wilkins is now sharing her story to raise awareness about the condition.

Ms Wilkins, a healthcare assistant, said: ‘At the age of 14 I couldn’t believe it when doctors told me I was born with two vaginas, two cervixes and two wombs.

‘I was in complete shock as I’d never noticed the condition before as the differences were only internal.

‘All my friends had started their periods but I was only suffering from stomach cramps but nothing else.

‘As the pain got worse my mum, Polly, took me to the doctors thinking I had an ovarian cyst because a lump had formed but no-one would scan me.

‘At least eight months later and multiple visits to my GP, my uterus ruptured when I went to the toilet and I heard a huge pop and knew something inside me had exploded.

‘I was in agony, there was so much blood and I rushed to hospital where doctors examined me and finally diagnosed me with UD.

‘The condition had caused a blockage and my menstrual blood to build up, which had reached 12cm in size.

‘Within two months I had surgery to make my two vaginas into one to prevent my uterus rupturing again. I was warned after my diagnosis that it would be difficult to conceive due to reproductive organs being half the size they should be, making implantation harder.

‘Thankfully though I have my two little miracles now and I’m just so pleased they were born healthy.’

During her sixth pregnancy in 2008 she was over the moon when she surpassed the 12-week mark.

After learning she was carrying the baby in her left womb, Ms Wilkins went on to have a cervical stitch to help prevent Molly being born too prematurely.

Five years later, after another miscarriage, she went on to have George, who developed in her right womb, with her now partner, Lee Welch, 37.

Ms Wilkins said: ‘Unlike most mums, falling pregnant was actually a difficult time for me and I learnt to not even celebrate the news.

‘Doctors had warned me it would be difficult to conceive and after the first miscarriage I didn’t allow myself to get excited.

‘With Molly I had a cervical stitch to stop her being born too prematurely as my womb is split in half its half the size, meaning it’s much weaker.

‘Thankfully she was a little fighter and she held on for as long as she could before being delivered by a C-section seven weeks and two days early.

‘I split from her father during the pregnancy as we wanted different things but I was overwhelmed when the doctor placed her in my arms, I was so happy, I was finally a mum.

‘Then, after meeting Lee, we decided we wanted another child, but I miscarried again before falling pregnant with George.

‘This time I was given steroids to speed up George’s growth so when he was born seven weeks and two days early again he was stronger than Molly meaning he was out of neonatal care sooner.’

Despite having the unusual condition, Ms Wilkins has never been embarrassed to talk about it and is now trying to raise awareness so other women aren’t ashamed.

She said: ‘I’ve always been upfront and honest with men I’ve dated, I wanted them to know that I may never fall pregnant and uterus didelphys is just a part of who I am.

‘Having UD doesn’t make you any less of a woman, your internal organs have just formed slightly differently.

‘I’ve gone on to lead a relatively normal life, I only have one kidney too which is related to the condition but again I haven’t let this hold me back.

‘I want to raise awareness as many medical professionals are unaware of the condition and every time I go for a smear it always amazes me how little people know, and how many weird questions I get asked.

‘I don’t have plans for any more children, I already have two beautiful kids and couldn’t be happier – I’m the luckiest woman in the world.’