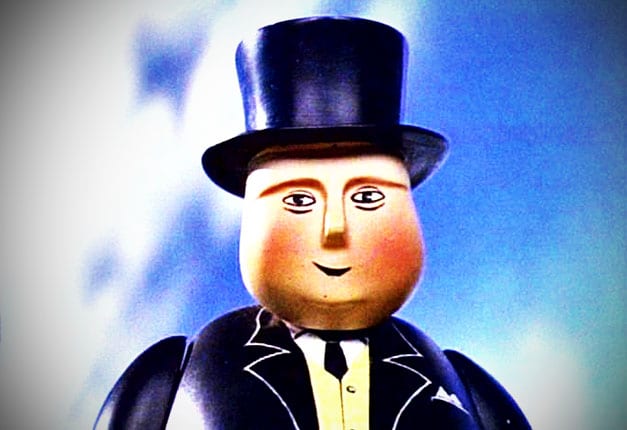 Phoeey to that I said and happily let my son suck away happily on his dummy for sleeps.  Oh and the odd whingy afternoon that seemed to stretch on forever!

It wasn’t until my second child came along that I began to wonder “Was No. 1 son was too old for a dummy?”.  In retrospect I laugh my head off because he was a week over two!  Whether he was too young, too old or too in-between, I’d got it into my over-hormoned body and brain that we should get rid of the dummy (who does that with a 3 week old in the house)?!

I tell this story because it brings back wonderful memories but also because it might just help you out if you’re going through the same thing.

I decided one afternoon it was time.  And within a few minutes, I’d decided to bring up the subject with my little man.  Out the words tumbled and then there was no going back!

Being an avid Thomas the Tank Engine fan (actually replace fan with fanatic), I felt I had a good strategy.  I told my son that when all little boys turn two, the Fat Controller comes by their house and takes their dummy away so that a little boy baby can have it.

I recall him looking wide-eyed at me at the realization that he could potentially be losing his dummy! I quickly went onto the next stage – explaining that because the Fat Controller was so happy, he left a brand new train in place of the dummy. Now, this was something to get excited about.

“Can we do it tonight? Can we do it now? Can the Fat Controller take my dummy now? Which train will he bring me?”  Even now, I smile as I remember the chirpy little man who had dashed off to grab the dummy.

So, we were ready.  A super quick call to Daddy at work to ensure he purchased a train from the Thomas set on his way home and the plan was set to play out.

Before bathtime, we put the dummy into a ‘special little box’ and set it on the front doorstep with me explaining that while we were in the bath, the Fat Controller would come by to collect the dummy and leave the new train.

You can imagine bathtime was a quick affair that night with little mister dying to dash back to the front doorstep to check that all had happened according to plan.  Thankfully Dad arrived home just in time and by the time a naked little man had dashed to the front door, the dummy was gone and a spanking new James complete with tender sat there waiting.

The next hour or two were of course full of the excited chatter of a kid with a new toy.  Bedtime arrived and while we were a little doubtful it would last, our little man trotted off to bed happily.

For the next 10 minutes, we heard him chatting to James.  Then he went quiet and then we heard a thump.

Then we heard him say “I hate the Fa Contrower” and begin to cry.  My heart melted and I had to go in.  I sat on the edge of his bed and realized just how tiny he was.  Although with maturity beyond his years he said he knew the baby boy needed his dummy.  He just felt sad without it.

I stroked his hair for a few minutes and he fell asleep – as he has done every night since then.  Having a concrete explanation made it easy for him to explain to himself and everyone who would listen exactly why he had given his dummy away. “He was helping the Fat Controller”!

In the years that have followed, he’s been able to help me execute the separation between child and dummy for his brother and sisters – keeping the story of the dummies alive and giving out hugs when it all got too much! One gave her dummy to the Zoo Keeper for the baby monkeys, another left hers in a pink sequined box for the dummy fairy and another threw his overboard on the harbour for the baby merboys!

Have you had to be ingenious when it comes to getting rid of dummies? Got any tips you can share on making it less painful for everyone?

This post was written by a real mum, just like you.  She has registered a website but has been too busy with everything else to get it working!  For now, she is going to write anonymously for Mouths of Mums. Her thinking is that if she writes anonymously, she can be real and true – to herself and to you. Her ramblings will eventually create the ‘Diary of a real mum’.