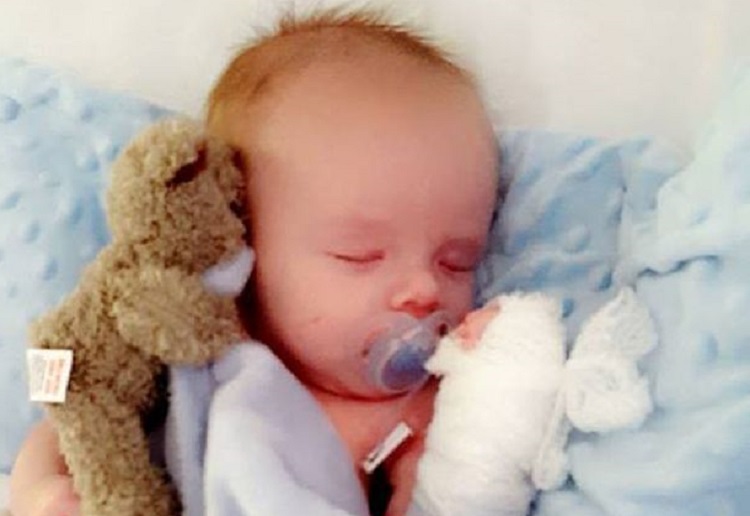 Mum left heartbroken after kissing her tiny baby left him in hospital with a soaring temperature and breathing problems.

Doctors warned, Kirsty Carrington he may not survive as he struggled to respond to treatment.

At first it was a mystery why her beautiful baby was on death’s door. When Kirsty, 28, discovered the truth she was horrified.

She had passed on a potentially fatal virus through a cold sore on her lips.

Kirsty told the Sunday People “I’d never do ­anything to hurt my kids. I kissed my baby because I loved him and I’m devastated to think how close I came to killing him.”

She has had cold sores since her teenage years and they can come back once a month.

And although Kirsty does not kiss partner Chris Nixon, 31, ­during an outbreak she had no idea how dangerous the herpes simplex virus can be for babies.

It can spread to their brain and other organs, causing potentially permanent and fatal damage.

She said: “I didn’t know much about it. I don’t remember how it started but knew I’d have it for life. I’d put cold sore cream on the blister when it appeared and wait for it to go away.”

“I forgot the cold sore was even there as I kissed little Ole-John. And my mistake nearly cost my baby his life.”

Kirsty said: “He told us Ole-John wasn’t responding to any treatment. He asked us if anyone in the family had suffered any serious infections or illnesses recently.

“I suddenly jumped to my feet, shouting about my cold sore. I told him I’d gone to the chemist to have it checked.”

The doctor inspected Kirsty’s cold sore, which was healing but still visible. He asked if she had kissed the baby.

Kirsty said: “Panic rose in my voice as I admitted that I had. The doctor said he was in a ­critical condition but they could now try a different treatment plan.” The herpes virus had travelled to the tiny baby’s brain.

He was diagnosed with ­meningoencephalitis – the ­tissues covering his brain and the brain itself were infected.

“I didn’t realise how dangerous my kiss could be.

“I kissed Ole-John because I love him, yet I nearly killed him. I hope my story serves as a warning to other cold sore sufferers – whatever you do, if you have a flare up, don’t kiss your baby.”