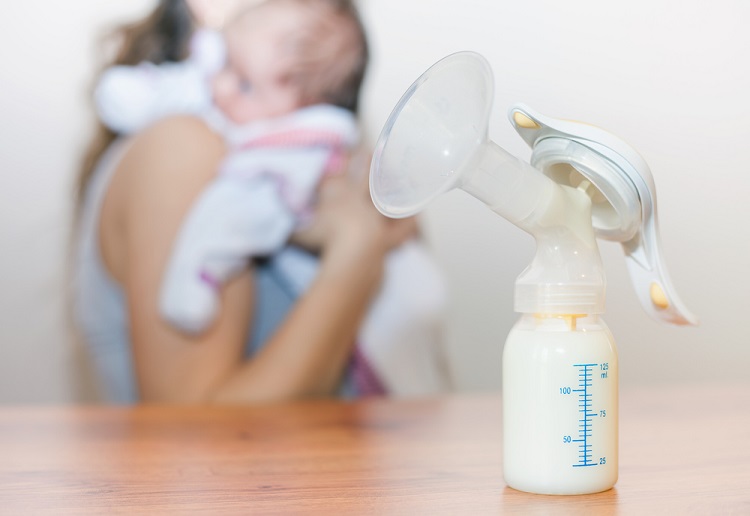 A mum’s texts looking for breast milk from another mother has gone viral, after the exchange turned nasty very quickly.

Images of the conversation were posted to Imgur, showing the mums text asking for breast milk for her two-year-old son.

The mum said she’d heard from a friend that the other lady had donated breast milk to a baby in need and was wondering if she had any to spare.

The other mum was happy to help out, asking how old the baby is and how much was needed.

“Oh that’s amazing. My boy is almost 2 and he eats lots lol. I’ll take it all off your hands haha,” the mum wrote back.

When the other mum wrote back saying she can only spare about 60 ounces because she has her own six-week-old baby girl and she usually only helps out infant/premature babies, the woman wasn’t happy.

“Lol…60 ounces? He eats like almost 20 a day. That’s only three days worth,” the mum replied, saying her son had a sensitive stomach and can only handle breast milk.,” she said.

“Don’t understand why you can’t just give it to me? Why does it have to be a premmie? My boy was a premmie and he is a baby in need.”

That’s when the other mum responded, telling the woman that her child is in fact a toddler and not a baby who can only feed exclusively on breast milk.

“I’ve offered you what I can spare already and am happy to see how much I have left over adter donating the majority this weekend,” she said.

The other mum was having none of it and text back calling the good samaritan a b**** and telling her she could keep her ‘sour milk’.

“Feel sorry for whichever poor kids ends up with it,” she said. 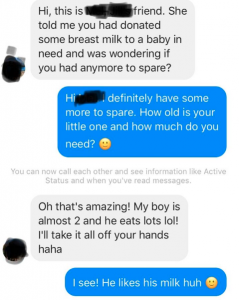 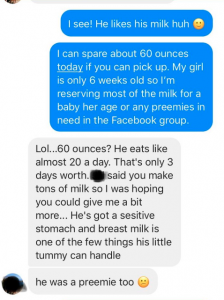 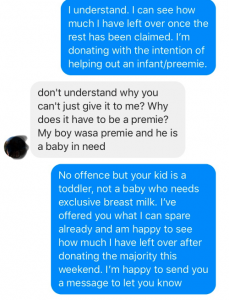 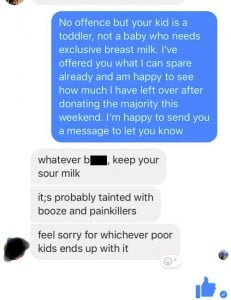 Ummm OK then. That got nasty pretty quick.