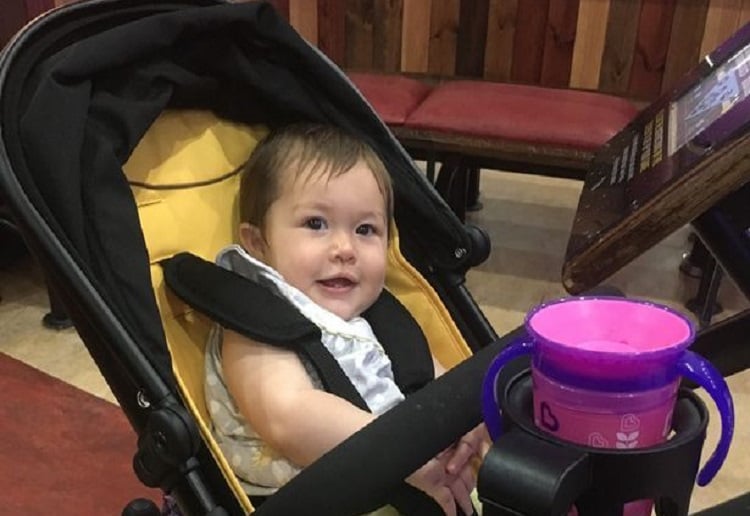 A devastated mum has issued a warning to other parents after her baby “narrowly escaped strangulation” due to an alleged fault with her baby’s pram.

Nicki Elsworth, 35, found one-year-old daughter Freya with her neck tangled in the harness of her iCandy Peach buggy after the buckle allegedly broke

The mum told Wales Online : “I put her in the pushchair to go the shop and, when we were out, I suddenly noticed that her crying started changing.

“When I looked down the buckle had broken and she was hanging in the pram with her neck tangled in the harness.

“At first I thought she had somehow managed to undo the straps, but we later discovered the buckle was faulty.”

Nicki claimed the incident left Freya with “raised red marks” on her body, including on her chest, reports The Mirror.

She said: “She didn’t want to get back in the buggy for a few days afterwards.

“She was quite clingy, and I couldn’t stop shaking after it happened.”

Nicki said: “I have since been advised of three other infants who have had similar accidents and escaped with minimal harm through luck.”

iCandy said “a small number” of iCandy Peach buckles had broken while they were being used.

A spokeswoman said: “This results in the crotch strap coming away from the buckle.

“It should be noted that the waist and shoulder harness is unaffected and will stay intact.

“As with all iCandy products, extensive testing above and beyond the requirements of safety standards, including user trials were carried out.

“During the process of formal certification and due diligence, no fault was found with the buckle.”

The company said further risk assessments were carried out as soon as they were first notified of the buckle breaking.

“Although the buckle passed all formal safety and due diligence testing, immediate changes to the design and manufacturing process were made to the buckle as soon as an issue was identified.

“Since this change has been implemented, no further occurrences have been reported from the new buckle.

“The faulty batch numbers were identified, stockists made aware and a notification issued on our social media channels and website to enable iCandy to implement the modified part changes as efficiently as possible.

“We would like to take this opportunity to remind users to check if their product qualifies for an updated buckle.”

She added: “The safety and protection of all our customers and their families are central at iCandy and as such, it is our policy to act swiftly whenever we identify any potential risks for injury or we are made aware of them by our consumers, even when the likelihood of an occurrence is limited.”

Please always check your pram with each use to make sure no straps or buckles have came loose.