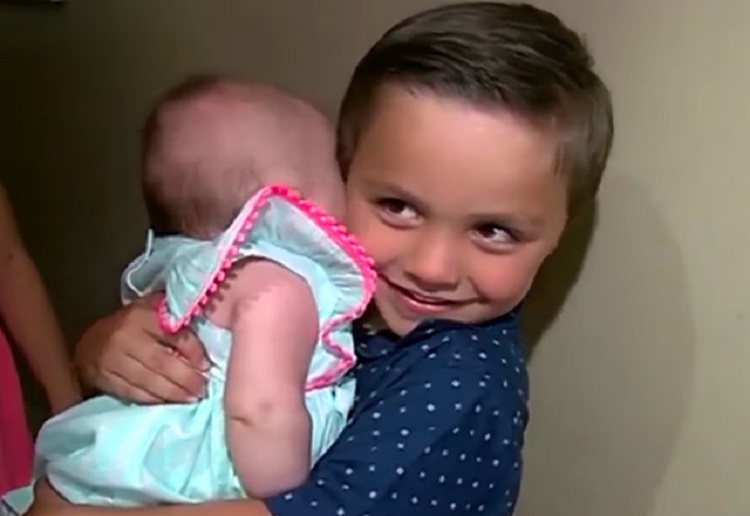 A young boy shocked his neighbour when she discovered him on her doorstep with his baby sister after his mum had blacked out in the shower.

Five-year-old, Salvatore Cicalese, was in bed when he heard his mother fall. He grabbed his two-month-old baby sister, wrapped her in a blanket and took her to the living room.

He then proceeded to grab a bar stool and went out into the garage, stood on the stool to open the garage door, went back in the house to get his baby sister and carried her to their neighbor’s home.

“My Mum Died In The Shower”

Neighbour, Jessica Penoyer, says she was surprised when little Sal showed up at her front door by himself at night.

“He’s standing there and holding something and I thought it was a doll,” she said. Jessica admits she initially thought Sal was telling her his dog died.

“He said no, my mum died in the shower. Can you take care of us?” said Penner.

What A Little Hero

She called the emergency number and found the child’s mother unconscious in the bathtub, with the shower still running.

“Honestly he saved my life. I was under the faucet. if he wouldn’t have gotten help, I would I would have drowned,” said Sal’s mother Kaitlyn Cicalese.

This was her second seizure since her pregnancy. Ms Cicalese said all she remembers was putting her children to bed, then going to take a shower after a stressful day.

“I turned on the shower, that’s all I remember,” said Ms Cicalese. Her next memory was waking up in the hospital.

She said the incident had been traumatic for her son.

He Didn’t Want His Sister To See His Mum Dead

She added that Sal had told his “nana” that he took the baby and left to get help because he did not want his sister to see their mummy dead.

Sal did not say much, but he showed ABC15 Arizona how he climbed on top of the bar stool to get help. He said he fell on a stack of shoes at one point, then got back up on the stool.

Ms Cicalese said she was amazed at the courage and bravery her son had displayed.

Rural Metro firefighters decided to honour the child after hearing the story. A fire truck rolled up to the home one afternoon.

Fire spokesman Shawn Gilleland presented Sal with an “honorary firefighter” certificate, a patch, a shirt, and a helmet.

“Rural Metro fire wants to recognize you as an honorary firefighter. You get to join the ranks of all these guys that came to help your mum,” said Gilleland.

He added that this story was a great example for parents to discuss how to respond to an emergency with their children.

“Talk to them about it. What do you need to do? How do you get out of your house? What to do if there is a fire,” said Gilleland.

Little Sal’s family said they had not discussed any of this with their son before, it seems like he acted on instinct..

What a brave little boy!