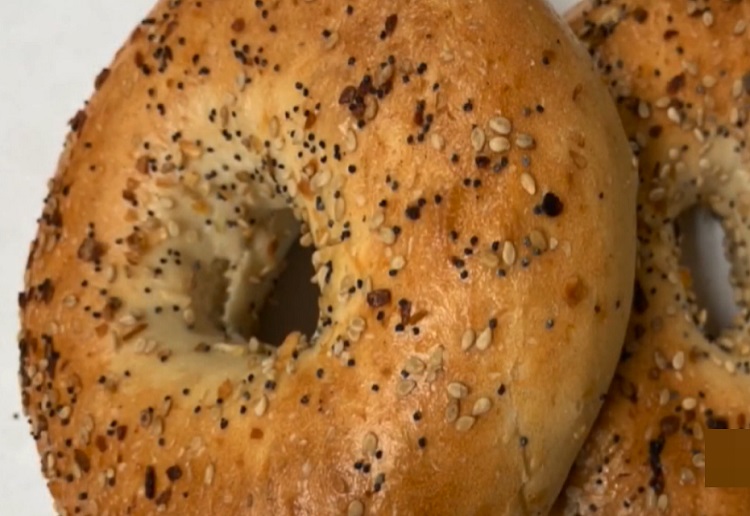 Mum forcibly separated from her newborn baby after she ate a poppy seed bagel that caused her to fail a drug test.

Elizabeth Dominguez, 29, ate the bagel just hours before she went into labour on May 1.

Arriving at the hospital to give birth, Ms Dominguez was asked for a urine sample. But she was shocked to learn that it came back testing positive to opiates.

‘I called my husband freaking out saying “How is this possible? I don’t do drugs!'” Ms Dominguez told WKBW.

Husband, Mark Dominguez asked her what she had to eat that day.

‘I told him a bagel and a sub,’ Ms Dominguez recalled. ‘That’s all I had. He told me it must be from the bagel.’

While baby Carter’s tests did not show any opiates in his system, the newborn was required to stay in the hospital so he could be observed for withdrawal.

Meanwhile, Ms Dominguez was discharged and separated from her son.

Further follow-up reports showed she only acquired the positive reading because of the poppy seeds on her bagel.

One clinical pharmacist explained that the seeds are derived from the opium plant.

‘In some cases eating a large amount of poppy seed such as the kind found in a bagel has been shown to produce low levels of morphine and codeine in the urine,’ Michelle Rainka told WABC.

‘Potentially those seeds have not been washed and can contain that.’

Rainka revealed that anywhere from ‘one to three bagels with poppy seeds’ could produce a positive result on a urine test.

While Ms Dominguez was swiftly reunited with her baby boy, she says the ordeal was terrifying.

‘I felt like a terrible mother leaving him,’ she said. ‘I just want everyone to know that this could happen.’

‘It’s such a terrible thing and I don’t want it to happen to anyone.’

Tests later confirmed that Ms Dominguez was a false positive.

What a terrifying ordeal for them.