Article Now You Can Book A Holiday At The Vegemite Villa 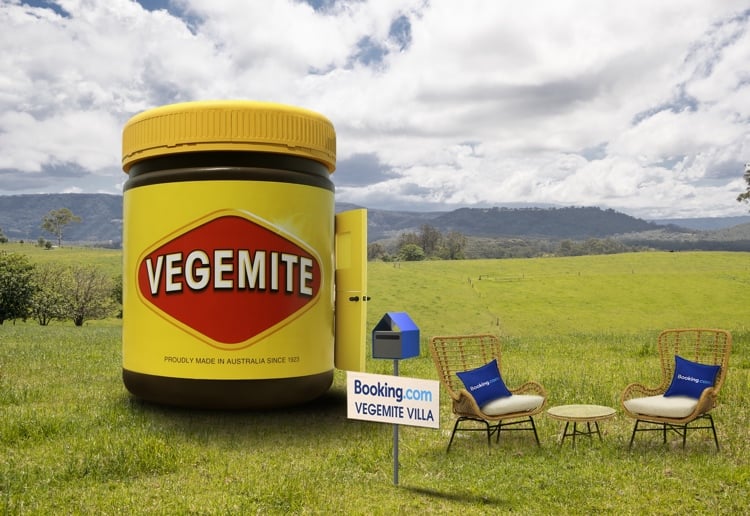 My daughter is OBSESSED with Vegemite so she’ll be so excited that she can now stay in a giant jar of Vegemite, called the Vegemite Villa.

The custom-built, self-contained Villa looks like a regular Vegemite jar from the outside. But inside, it’s packed with Vegemite-themed furnishings, including a bed which resembles Vegemite on toast, eye masks, slippers, socks and an alarm clock. The jar villa is also fully equipped with PowerPoints and USB ports, making sure guests have their tech fully charged to capture plenty of selfies inside.

The Vegemite Villa is the brainchild of booking.com, who has come up with this idea to give the biggest vegemite fans, the chance to immerse themselves in their favourite spread.

The giant jar is four-metres-high and two-metres-wide and will be situated in the homeland of Vegemite’s parent company, Bega Cheese, Brogo, NSW and will accommodate two guests at a time, for two nights.

Lucky travellers will have the chance to vege out in the peaceful New South Wales countryside and live the Australian dream with this unique experience.

Vegemite Villa: All You Ever Wanted To Know

If you’re wondering what goes into building a Vegemite Villa, here it is:

Book your stay at the VEGEMITE Villa

Priced at just $89.00 per night, The Vegemite Villa is exclusively available on Booking.com for two nights – 6 and 7 December 2019.

Located at 610 Warrigal Range Rd, Brogo in NSW, the VEGEMITE Villa will open bookings on 4 December at 10:00AM AEST.

We assume there’ll be lots and lots of vegemite available for breakfast!

For more information and your chance to book, visit: booking.com/hotel/au/vegemite-villa.en-gb.html