A nurse was fired after she allegedly posted about a young patient who may have the measles on an anti-vaccination group’s Facebook page.

The nurse in Texas, who has not yet been named, allegedly posted to a Facebook page called “Proud Parents of Unvaccinated Children — Texas” regarding a boy, between the age of one to three years old, who is being treated at the hospital for a possible case of the measles which he contracted overseas.

In the since-deleted posts, the nurse shared her experience of treating someone with measles for the first time.

“I think it’s easy for us non-vaxxers to make assumptions, but most of us have never and will never see one of these diseases,” she wrote.

“By no means have I changed my vax stance, and I never will. But this poor kid was bad off and as a parent, I could see vaccinating out of fear.”

She  added that she plans to continue “along my non-vax journey with no regrets, but I’ll definitely have compassion to those who vehemently vaccinate.”
She also added she was considering swabbing the boy’s mouth so she could infect her 13-year-old with the virus. 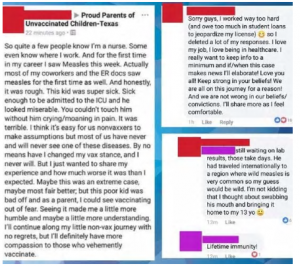 The post was quickly shared around social media and sparked mass outrage.

“Please find a way to report this psycho,” one person wrote.

Another said: “Disgusting that she could look at a sick child and think about infecting her own, rather than immunising her.”

The hospital later confirmed the nurse was removed from the toddler’s care on Friday before she was fired on Monday for posting “protected health information”.

We were made aware that one of our nurses posted protected health information regarding a patient on social media,” a hospital spokesperson told Fox News in a statement. “We take these matters very seriously as the privacy and well-being of our patients is always a top priority. After an internal investigation, this individual is no longer with the organization.”

The hospital clarified it didn’t fire the nurse because of her anti-vaccine views, but rather because “she posted protected health information,” according to the Houston Chronicle.