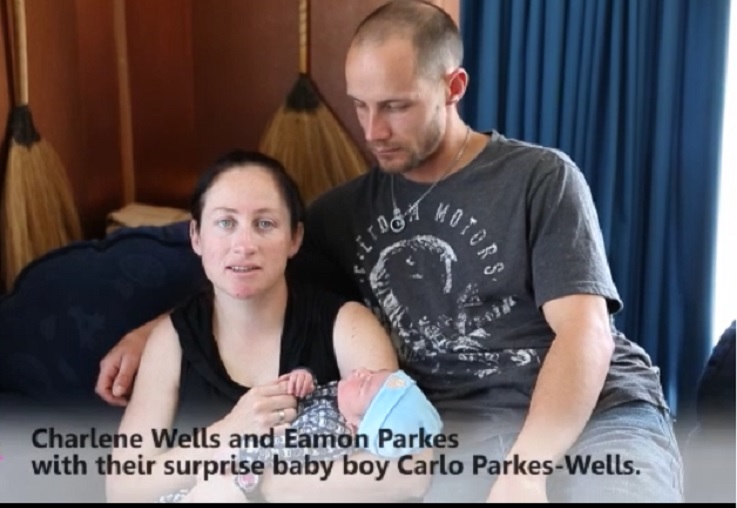 Mum had no idea she was pregnant when her severe abdominal pain turned out to be the onset of labour.

NZ couple Charlene Wells, 28, and Eamon Parkes, 31, had no idea they were expecting their first baby when Charlene went to emergency suffering back and abdominal pain, thinking it was a kidney stone.

“I was pretty shocked. I thought it was kidney stones or something,” Wells said.

She was quickly told by staff that she was 40 weeks pregnant and due to deliver.

‘They ran a test and it was positive. I thought it was in the early stages, not a ‘yeah you‘re having it today’ kind of stage.

‘But they were straight up about it, like you’re pregnant and quite far along. I was pretty shocked. I thought it was kidney stones or something.’

She had experienced some lower back pain but attributed it to long hours on her feet at her job as a sous chef at Stoke’s Turf Hotel.

Because her placenta had been resting at the front of her stomach, Wells never felt any kicking or movement.

“[Hospital staff] were trying to rule it out at first. I normally bike a lot so I thought I had just put on a couple of pounds from a sleepy winter,” she said.

Parkes said the surprise birth had been “the talk of the town”.

“They say it’s more common than you think, but it’s not common for Nelson. It’s one of those stories you read from overseas.”

“You’re trying to get your head around your normal everyday life and then this little man enters the mix.

“Most people have eight or nine months to prepare. We had about nine hours.”

Friend Janaya Te Tomo posted a plea for donations on Facebook and said she was astounded by the generosity of people.

“There are people out there who don’t have children but say ‘I’ll buy a pack of nappies’.

“We have got everything from prams, to nappies and clothes. You name it, we’ve got it. Some of the stuff is still brand new with tags on,” Te Tomo said.

The couple said the support from the wider community alone, as well as from friends and family has been incredible.

WOW! What an amazing story to share at their sons 18th birthday.