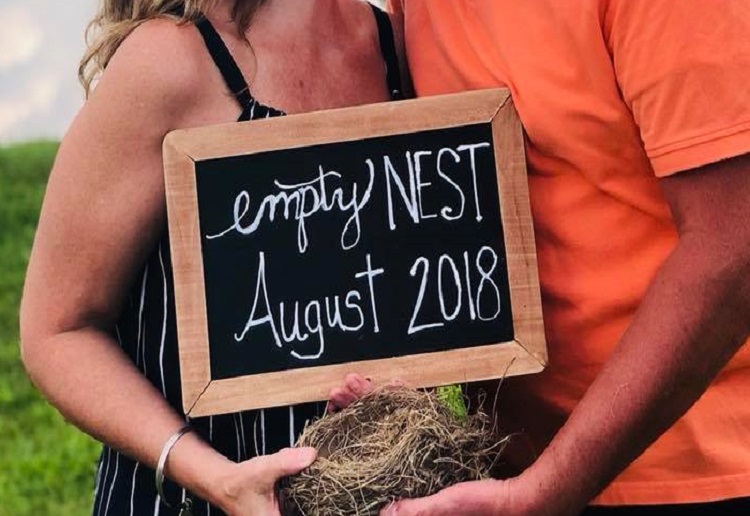 Parents hilarious photo shoot goes viral after becoming empty nesters when they dropped their youngest child off at college.

Vicky Piper, 48, agreed to do the photo shoot with her husband, Jeff, 50, after he made the suggestion, shared Daily Mail.

He found an empty birds nest in their backyard in Ohio, so the couple could cleverly announce they dropped their youngest off at college to all their friends and family.

’20 years ago we didn’t have gender reveal parties, portraits in beautiful fields with baby shoes to announce a pregnancy,’ Vicky wrote in a Facebook post that has since gone viral.

She continued: ‘Nor did we have baby photos on a blanket with a circle around a number showing how old they were. We drove our babies to sears or Olan Mills to get their photo.

‘So in honor of our next chapter… here you go.’

Mrs Piper spoke to TODAY Parents and said, “We had just dropped off our son at college — our daughter went to college last year, and our son is starting this year — and we came home, and so many people were so concerned, like, ‘Are you guys going to be okay?’” she recalled.

“We just had a different perspective about the whole thing: both kids are doing great, and they’re in college, and that’s awesome! So the bottom line is that we had a different view of that ‘empty nest.’”

“If you’re in your 40s or 50s, when you had your kids, you missed all these beautiful photo opportunities kids do now,” she laughed. “So there was definitely an element of ‘Let’s join those whippersnappers!’”

“For the last twenty years, we’ve been focused on the kids and trying to take care of ourselves too,” Mrs Piper said. “And now we can focus on us.”

Nawww I dread the day my children leave home.

How do you feel about it?