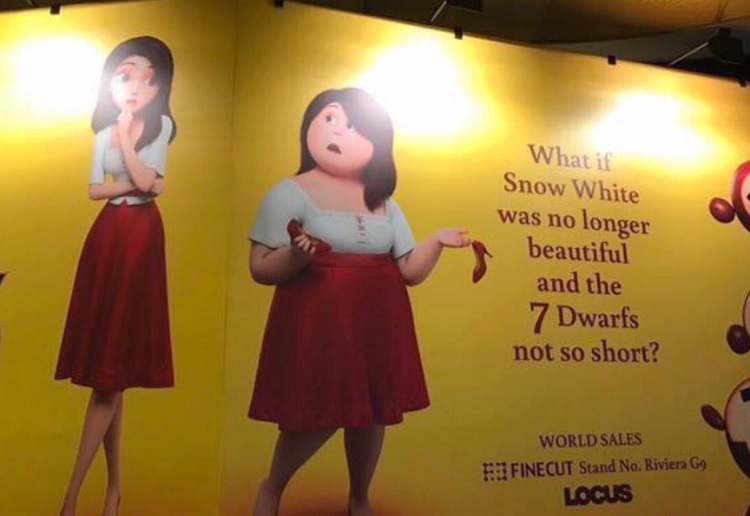 A spin-off movie of the much-loved fairy tale Snow White has people furious over the marketing material aimed at young children.

A billboard in France for the upcoming animated adaptation, Red Shoes & the 7 Dwarfs shows two Snow White characters alongside the tag line, “What if Snow White was no longer beautiful and the 7 dwarfs not so short?”

Naturally, people aren’t happy about the implication that gaining weight and going makeup-free makes someone less beautiful. And they’re making it known on social media.

“So, this has actually been approved as appropriate for an animation movie?” one commentator tweeted.

“‘Red Shoes & the 7 Dwarfs’ is an animation film directed towards kids about how Snow White isn’t beautiful anymore because she’s fat,” another wrote.

Another added,”I walk past this billboard every day at Cannes and I’m still stymied by it.”

Tess Holliday, a strident advocate for body positivity spoke out too, with the size 18 (AU) model taking aim at and tagging 20-year-old Chloe, who voices the main character in the film.

“How did this get approved by an entire marketing team? Why is it okay to tell young kids being fat = ugly?” Tess tweeted alongside a picture of the billboard.

How did this get approved by an entire marketing team? Why is it okay to tell young kids being fat = ugly? ????????@ChloeGMoretz pic.twitter.com/PVhgwluGTM

A trailer for the film that features a scene with two dwarfs perving on the princess has garnered a similar response.

A producer for the film has since released a statement apologising for the marketing material and trailer.

“We realise [the poster and trailer] has had the opposite effect from that which was intended. That advertising campaign is being terminated,” the statement given to Salon.com stated.

How do you feel about this movie?