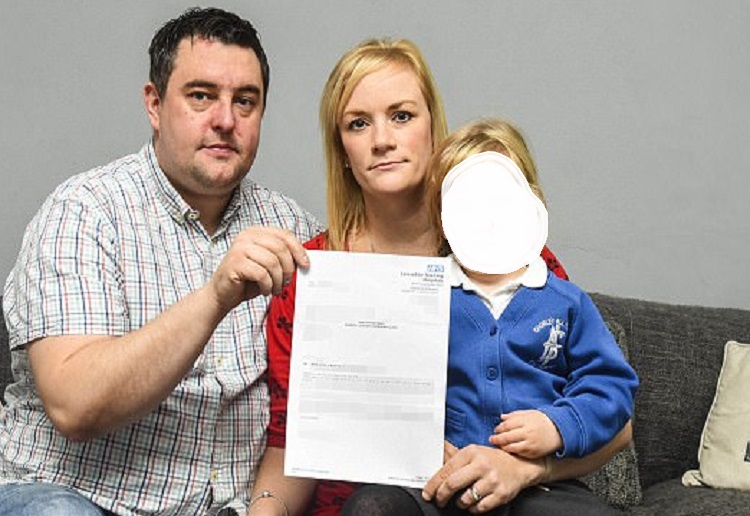 A mum has slammed a ‘sexist’ surgeon who wrote in a letter that her husband had ‘manfully stepped in’ to take his own daughter to a hospital appointment.

Outraged parents Jo and Billy Martin, from Chorley, were sent the letter two weeks after Billy took three-year-old daughter Jessica for an appointment at Royal Preston.

In the letter, the paediatric surgeon wrote: “Unfortunately her mum could not be at the clinic visit today as she has not been well and father stepped in manfully.”

The couple were so shocked they shared the letter on social media, branding the consultant’s choice of words ‘sexist’ and claim they could not imagine him using ‘womanfully’ in the same context, shares Daily Mail.

Mum-of-three Jo, who had planned to take Jessica to the appointment but was unwell, now claims she has been made to feel guilty for missing it.

Jo, 33, said: “My husband went instead but the consultant did not know that I was the one who was supposed to be taking her.
“As far as he should be concerned fathers and mothers should have equal responsibility for taking their children to hospital appointments.

“I couldn’t take her because I was ill and was already distressed about not being there.”

The freelance typist said the appointment had gone well and they received the letter a couple of weeks later.

Jo said: “The first time I read it I read it out loud and I was like ‘what? Surely I read that wrong’. I was shocked. I thought they can’t have put that. It’s ridiculous.

“It is terrible. It’s so sexist.

“It’s like when people say ‘dad is babysitting’. No, he’s not babysitting if they are his children.

“It’s assuming that women are there to do the childcare and men will step in when the woman is not available which is really sexist in my opinion.

“Stepping in ‘manfully’. What does that mean? Would I have done it ‘womanfully’?

“I could not believe it when I read it. I don’t know what the consultant was thinking.

“It was just a case of being a parent. If one is incapable for whatever reason the other will step in – it’s what you do as a parent.

“We are both responsible for caring for the children, that’s how we do it here. We both do as much as we can. There is no ‘this is your job’, it’s what needs doing gets done.” 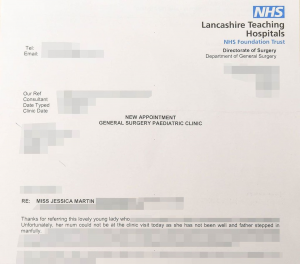 ‘I think it’s important to highlight it as I don’t think anyone should receive a letter like that.

‘It made me feel guilty because I hadn’t been well and could not attend the appointment and it was like they were pointing it out.

‘Then I was thinking why should I feel guilty? Her dad has the same amount of responsibility for Jessica as I do.’

Oh gosh, this does bug me too. I was only talking about something similar that happened to a friend recently.

I have noticed over the years with the numerous doctor visits we have had for our Heartkid that some of the older generation of doctor’s are very sexist.

I can be the one asking the questions and providing the details but yet they still seem to only address my husband with their response.

Frustrates me so much!

Surely they can see in today’s world that both parents are very involved in their kids lives, health problems included.

Have you ever experienced anything similar?