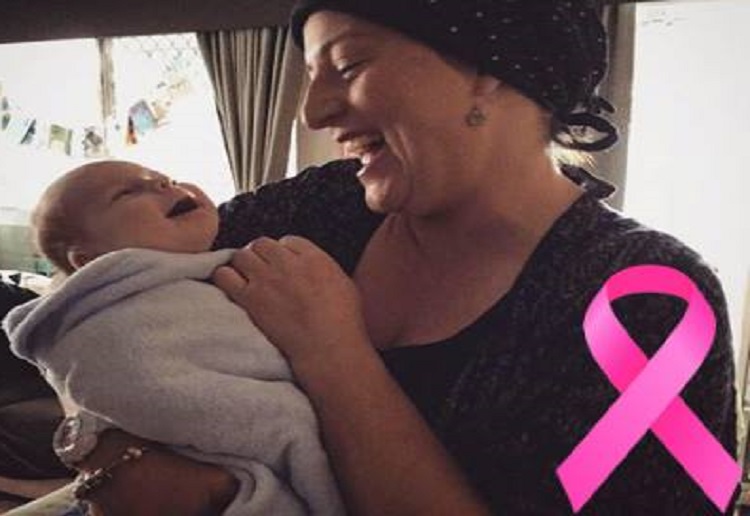 A Perth mother has described the devastating moment she discovered she had stage three breast cancer, 18 hours after giving birth to her second child.

Farrah Millar, 37, and her partner Brad, had been through three cycles of IVF over four years before they were blessed with their little girl, Lehnae.

Just five months after Lehnae was born, Ms Millar found out that she was miraculously expecting again, this time a baby boy.

18 hours after her baby was born on March 29, her life was turned upside down with a shock diagnosis of stage three breast cancer.

‘Around the time I found out I was pregnant I discovered a lump under my arm and in my left breast but I didn’t do anything about it… I was breastfeeding and so many changes go on in the breasts,’ Ms Millar, from Perth, told Daily Mail Australia.

But Ms Millar mentioned them to her midwife the week before she was due for a caesarean and was sent in for an urgent ultrasound.

‘I had biopsies done as well and they said they would be able to tell me my results on the Tuesday – the day I was booked in for my C-section,’ Ms Millar said.

‘On the Tuesday it all went well and then on the Wednesday morning I came out of the shower to find my doctor in my room with two nurses standing looking at me. 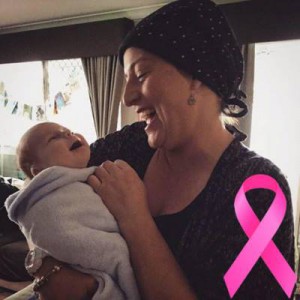 ‘The first thing out of my mouth was “Oh my God I’ve got cancer”. I just knew it by the way they were looking at me.’

‘All I could think was that I might never get to see them grow up. I’d had these amazing babies and we had tried for so long and then to fall pregnant again we were simply blown away.’

‘I was in a massive daze because I was in hospital for four days recovering and was still weak and then after all the tests I was still in disbelief because cancer had never touched my life so closely,’ she said.

‘For it to happen to me it felt like a dream and it still does some days, it’s not real to me. And people were looking at me with their heads tilted everywhere I went because I was carting this newborn around with me.’

Ms Millar was told she would have to stop breastfeeding within a few weeks, so she made sure to have little Rhylan by her side at all times to breastfeed until the last possible moment.

‘One of the nurses told me after I had the radioactive dye injected into me that I wouldn’t be able to touch Rhylan for eight to 12 hours because of the dye so from that minute really I couldn’t feed him,’ Ms Millar said.

‘Mum took us to Kmart to buy bottles and formula on this whirlwind trip because we hadn’t expected it.’

Ms Millar, who has a 72 per cent chance of beating her type of cancer, had her first chemotherapy treatment on April 18 and she will need to have them every second week for the next four months.

This will then be followed by surgery, either a lumpectomy or a mastectomy, and then radiation therapy every day for six weeks.

‘I swing between confidence and fear. I’ve read a lot about similar situations and a lot don’t end well but there are a lot that do,’ Ms Millar said.

‘There are days where I know I can do this and I feel great but then there are days like Mother’s Day when I’m not feeling great and I start to wonder how many more I will have… that is why my page is so helpful for me because I can pour my emotions out.’

Ms Millar started a Facebook group, #FarrahsArmy, so she could share her journey with friends, family and other women.

‘These women have done so much for me – from care packages and gifts and even just being there for a chat on hard days. The outpouring of support I’ve had from complete strangers has been amazing,’ Ms Millar said.

‘My story has been a wake up call to some and they realise how those tests so many of us neglect are very important.

‘For this message to get out there is amazing and it’s so great to know I can help educate and spread it far and wide.’

We wish Farrah all the best.