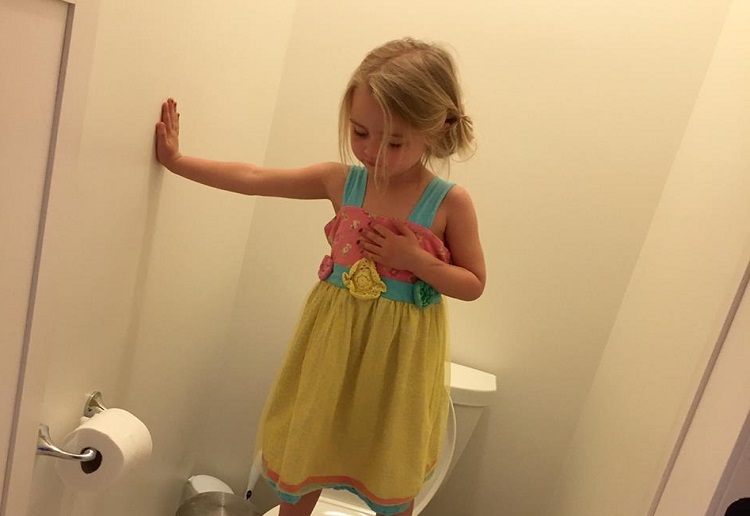 Stacey Wehrman Feeley from the US recently caught her 3-year-old daughter standing on the toilet in their bathroom. Initially, she was amused, but when she found out what her little girl was actually doing, she was beside herself.

In fact Stacey wrote “She was practicing a lockdown drill at her preschool and what you should do if you are stuck in a bathroom,” in her viral Facebook post, along with a photo of her daughter doing the drill.

Her emotional plea to politicians, other parents, and the public was published on June 15, it been shared more than 6700 times.

I took this picture because initially I thought it was funny. I was going to send it to my husband to show what our mischievous little three-year-old was up to. However, The moment she told me what she was doing I broke down. She was practicing for a lockdown drill at her preschool and what you should do if you are stuck in a bathroom. At that moment all innocence of what I thought my three-year-old possessed was gone.

Politicians – take a look. This is your child, your children, your grandchildren, your great grand children and future generations to come. They will live their lives and grow up in this world based on your decisions. They are barely 3 and they will hide in bathroom stalls standing on top of toilet seats. I do not know what will be harder for them? Trying to remain quiet for an extended amount of time or trying to keep their balance without letting a foot slip below the stall door?

No one thinks gun control will be 100% crime control. But maybe, just maybe, it helps 1% or 2% or 50%? Who knows unless we try? Why on earth are there not universal background checks? Where is a universal registration database? Why are high capacity magazines ever permitted to be sold to anyone other than direct to the military? Is that really necessary to protect yourself or hunt for that matter? What about smart guns, where are they? C’mon techies! The 2nd Amendment is a beast to battle and wiping out the right to bear arms is not on the table. Does anyone really think that will be accomplished? Because it won’t. Amended to some extent? Maybe. But how many decades will that take? Where’s the evolution of our so called “living document” for this subject matter? A document that originally allowed slavery and prevented women from voting? NRA, are you even trying? Let’s talk mental health. Where is the $500 million that the Obama administration put into the budget for approval…did it go through? Is it being implemented or just sitting there? Where is the access to care for those struggling with mental illness? Politicians, I ask you…how can I help?

Banning together, signing petitions, rallying to get your voice heard is good, but is it actually doing anything or just making us feel better about the current situation? We need action. I applaud politicians like Senator Chris Murphy but so many of our elected politicians can’t manage to work together (maybe they shouldn’t be paid for a job they can’t do…just saying) or since they are in bed with all the wrong people, it is up to us if we want change. I want to know what new smart technology is being built for safer guns, advanced security in public places, databases, traveling care for the mentally ill…anything! Entrepreneurs, innovators, are you there? Can I help? Can I help you make a difference? I want to offer support. I cannot give you techie advice, expertise in healthcare, or financial backing, BUT maybe I can point you in the right direction? Maybe I know someone who knows someone who can help? Incubators, investors…if this issue concerns you, do what you do best and help make change. Can I help? Hold funding competitions, provide think tanks for these very things. Hollywood, the PSA’s are good, but not good enough. Eventually they disappear and are forgotten.

I am not pretending to have all the answers or even a shred of them, but unless you want your children standing on top of a toilet, we need to do something! Please share. #dosomething #prayfororlando #wecandobetter Moms Demand Action for Gun Sense in America

Well done to Stacey for taking a stance. Something has to change!