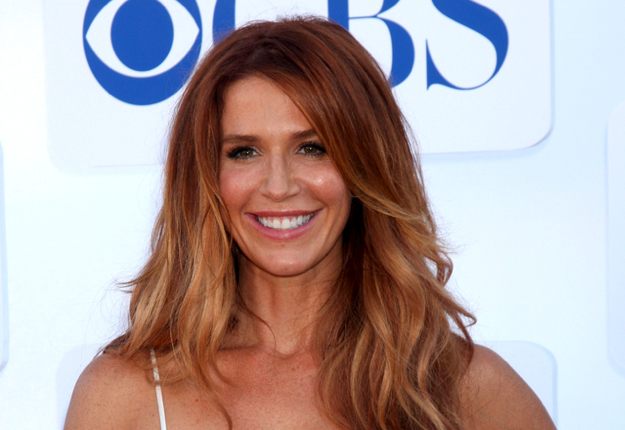 When we last heard from Australian actress Poppy Montgomery, she was agonising over what to name her coming baby.

She shared her thoughts about “the question that causes my chest to tighten in fear — ‘Have you picked out a name yet?’ A name. THE name. The name that my unborn son will carry with him for the rest of his life. What if I mess it up?”

We think she’s made a great decision – she and husband Shawn Sanford welcomed her third child, son Gus Monroe, on Nov. 11 and “Mom and baby are doing well,” her rep said.

Remarkably for Hollywood, Poppy, 42, managed to keep her pregnancy a secret for six months. “I haven’t told anyone yet, so people just think I have enormous boobs,” she said at the time. “I was like, ‘I wonder if they think I went and got a boob job?’”

But once she revealed it, “I’m hoping to get all of the privileges now of a real pregnant person!” she said. “I want to be respected and given lots of royal treatment.”

When Violet was born, Poppy was asked about how her body had changed, given that she had to go back to work two weeks later, on TV show Unforgettable. “I’m not going to put pressure on myself to make my body look like it never had a baby when it did,” she said.

“I’m going to treat my body with kindness, because it’s been through a lot. I’m absolutely rebelling against the idea that we as women should look like we never gave birth when we did. Instead, it should be celebrated. What our bodies do is really extraordinary.”

She also wants Violet to know that she has a healthy body image.

“I don’t want her to have that pressure. It becomes a bad thing that our bodies change as we get older and as we give birth,” Montgomery says. “The focus shifts to the wrong thing when we start obsessing about our bodies instead of celebrating our lives.”

How did you decide what you were going to name your little one/s?
Main image courtesy of Shutterstock.com