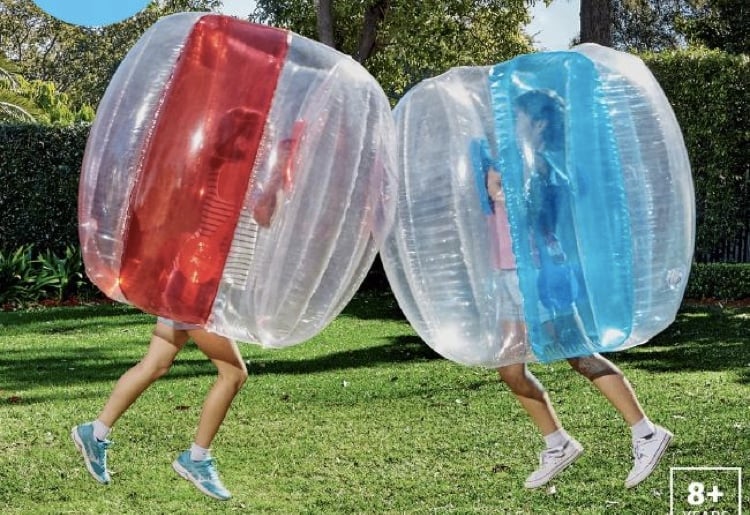 When the news came out, that Aldi was selling giant inflatable bubble balls, the world went wild. But unfortunately, our bubble experience was a bit of a balls-up.

Within minutes of sharing the news about the inflatable bubble ball on the Aldi facebook page, the post received thousands of comments from excited customers. The post has now over 84,000 comments, but unfortunately, the big bubble has officially burst.

The giant battle ball was on sale this past Saturday for $29.99 as part of Aldi’s Special Buys catalogue.

The ball is aimed for people eight years and above, inflates to around 121cm in diameter and has grips with adjustable shoulder straps. It comes in both red or a blue option. The minimum height to use the inflatable ball is 110cm.

“Simply inflate and then it’s game on!” the caption on Aldi’s post read.

But rather for us, it was simply inflate…then deflate and it’s game off…followed by lots of disappointment.

We managed to snag three of the Aldi inflatables on the weekend – one for each of our kids. We really thought that this was the answer to all our parenting problems. If a sibling argument breaks out, we’d simply take them out to the backyard, get them into their blown-up bubble gear and let them battle it out the old-fashioned way. We reckon by the time they’d finished bumping and bashing into eachother, the fight would have been long forgotten.

However, when we got home with our loot, all our dream bubble were popped, when we inflated the balls. The one ball had a hole in it so that would last two seconds before the air whistled out of it. The other one had a small split down one crease so that was the end of that one. The third one was just right but a massive war blew up to see who would be the first kid to get a try. And once that was decided, it was really not much fun for the poor ball-child to be bouncing along the grass all alone, with no other giant inflatable ball to bulldoze. Well, that activity fizzled out pretty fast. Be gone you hexed bubble ball, down to the garage to gather dust!

It seems I’m not the only one that had inflatable issues.

Aldi fan Kate left a comment on the supermarket’s facebook page saying:
“I bought 6 of these on Saturday. 4 had holes when I inflated them and 1 had a hole within 5 mins of playing with it. Followed instructions. Pretty disappointed to say the least”

Mick had a similar issue:
“yeah I bought 2 on Sunday and did exactly the same thing they both had splits in them, kids and I were gutted”

Hmmm…makes me wonder if this was an actual flaw with the design or just a big burst of bad luck?

Should They Go Back To The Shop?

And now the question remains, do I return them to Aldi.

Kate also wondered the same thing:
“I’m going to take them back but not sure if there’s a point in replacing them coz with that strike rate the odds aren’t good of getting ones that stay inflated.”

Did you buy the inflatable bubble balls? Have you had an Aldi fail? Tell us in the comments below.