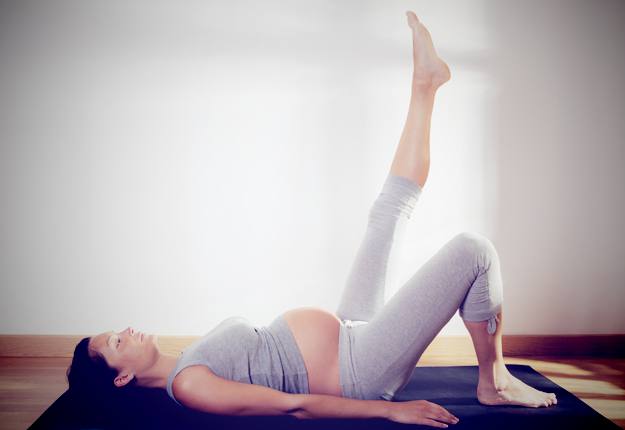 An expectant mother has claimed she was forced out of a fitness class by an instructor who shamed her for being pregnant.

Natalie Hillar, from Sydney, has been maintaining her fitness to ensure she has a healthy pregnancy.

But last Wednesday, the 40-year-old, who’s six months pregnant, said she was left ‘humiliated’ in front of everyone.

The Sydney mother-of-two claimed she was attending her regular ‘Bodycombat’ session at Fitness First when she was kicked out of the room.

‘I went into the class as usual. I took a position at the back of the room and the instructor read out the disclaimer which they do in every class,’ Ms Hillar told Daily Mail Australia.

‘She warned if anyone has any pregnancies or injuries to make sure they have a medical clearance, which I confidently have.

‘So the class starts and I’m doing the moves. I don’t jump around, but I do what’s comfortable. Then a minute into the class, the instructor stops the music and says: “I don’t know if anyone heard me at the beginning of the class but I don’t teach this class to pregnant people”.

‘I wasn’t sure if I heard her properly because she totally went against the disclaimer. I was so confused so I started exercising again.

‘At that point I realised I needed to leave.’

As the mother headed for the door, she claimed the instructor then shamed her in front of the class.

‘So I picked up my stuff and I muttered under my breath “unbelievable”. I was just shocked at what was happening,’ Ms Hillar said.

‘As I was walking out, I glared at her. Then she grabbed the microphone and shouted “I know you’re upset, but it’s for your own good, love”. I got really frustrated.’

Ms Hillar said she was shocked at the way she was treated.

‘I was definitely shaken up afterwards, I’m so used to going to the gym minding my own business. But she pretty much forced me out of the class,’ she claimed.

‘I felt really humiliated, I can’t hide it. It just felt like I was really shamed. I was really confused about how it all happened. I didn’t feel like I was doing anything wrong.

‘What confuses me most is I’ve been to the same class for my previous two pregnancies and I never had any problems.’

Ms Hillar said she went straight to the reception desk to complain about the instructor.

‘I told them what happened and they were very good about it,’ Ms Hillar claimed.

She said she hopes to see gyms provide more information for expectant mothers – and to be clearer about the types of classes available or not suitable for pregnant women.

By sharing her story, she wanted to speak out in an effort to prevent this from happening to other pregnancy women.

‘As a pregnant woman, I’m not there to lose crazy amounts of weight, I’m trying to do what’s best for me and it’s to maintain a healthy pregnancy,’ she said.

‘I never want to say anything harsh about Fitness First because I only have fantastic experiences there, but it was just this one person who needed to handle herself better.

‘It doesn’t matter what personal views you have, you can’t treat customers like that. I’d hate to see the instructor discriminating against other pregnant women.

‘It actually took me days to get the confidence to go back to the gym.’

A Fitness First spokesperson told Daily Mail Australia: ‘At Fitness First, the safety of our members is our number one priority.

‘We understand the level of exercise during pregnancy is personal and usually determined by pre-pregnancy fitness levels and advice from general practitioners.

‘In addition to advice from their GP, we recommend any pregnant members notify the group fitness instructor prior to participating in a class.

‘All of our group exercise instructors are required to make members aware of any risks and recommend against exercises should they be unsafe. In this case, this was the professional recommendation given.

‘The class BODYCOMBAT is not recommended during pregnancy because of the joint instability.

‘Our team are continuing to be in touch with Ms Hillar.’