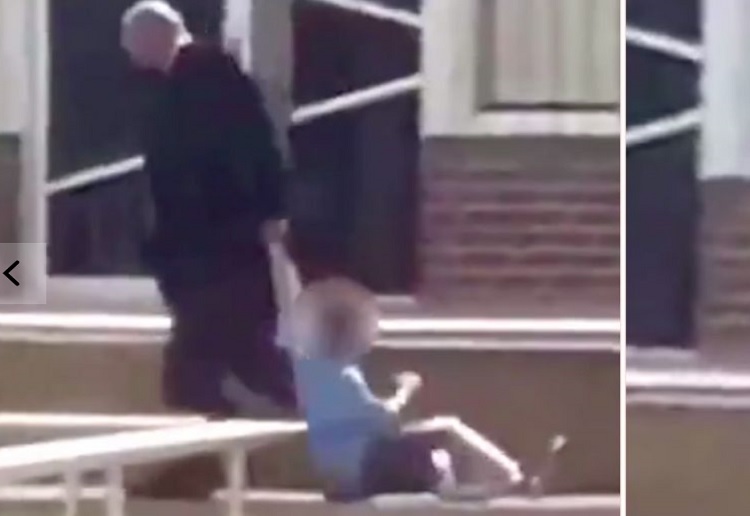 The principal of a state school in Melbourne’s west has been stood down after vision emerged of him allegedly dragging a student along the ground.

Victoria’s Education Minister James Merlino has ordered an investigation, saying he is “appalled”.

He left the school without comment after Seven News showed the vision to the Education Minister’s office.

“Let me be clear, I will not tolerate this kind of completely unacceptable behaviour in our schools,” Mr Merlino said.

Parents and students were shocked at the scene, which was filmed on a mobile phone.

Education Department policy says a teacher may take “any reasonable action that is immediately required to restrain a student from acts or behaviour dangerous to the member of the staff, student, or any other person.”

While nobody condones this behaviour people have commented that we should not throw stones before knowing the full story.

“If the student is putting other kids and teachers at risk, then 100% the principal has the authority to move the student away from others. Apparently the kid kicked a teacher who is 6 months pregnant in the stomach and was also throwing rocks at the principal’s car.
Maybe we should hear from the principle (who is experienced) before commenting. Bad form 7 News for enticing fear and outrage by not getting all the facts!!!”

There has even been a petition calling for his reinstatement.

The petition circulating said Mr Warner had been “an amazing influence on the school” and improved behaviour across the school.

“The worst outcome of this situation would be for the school to lose him as the principal and leader,” the petition, started by Mark England, reads. As of 10am, 629 people had signed the petition.

The boy’s sister, Bianca Moore, has since spoken out, saying the rumours are all false and he did not kick anyone.

“He suffers from ADHD and anxiety and obviously starting at a new school has upset him, he was having a tantrum,” she told the Daily Mail.

“I believe he was asked to share something to the class as it was their first day he didn’t want to and became upset.”

“Yes, he was misbehaving, but he was not physically abusing any teachers,” another relative said.

“Regardless of his behaviour, he should not have been treated like this.”

The incident is being further investigated.