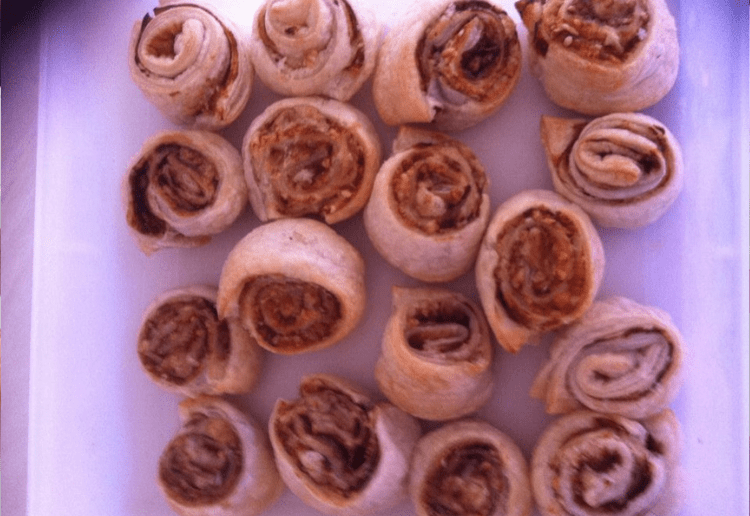 These mini cheese and vegemite scrolls are quick and easy to make. They’re perfect for the kid’s lunchboxes or as a tasty afternoon snack.

The best thing about these mini cheese and vegemite scrolls is their simplicity, though! If you have a jar of vegemite in the cupboard, some cheese in the fridge and some puff pastry at hand then there’s nothing more to do than start baking. This recipe is also super great if you want to introduce your kids to baking. Baking is a classic child-parent bonding experience, and this recipe is no exception! It is so simple that any keen young ‘un can help out, and older kids can make these mini cheese and vegemite scrolls all by themselves. These little scrolls also don’t leave a lot of room for mess-making as there’s no mixing involved, just assembly.

You know what else this cheesy bites of deliciousness are good for? Parties! ‘Don’t bring anything!’ the host said, but everyone knows you’ve got to bring something… Even if you only remember an hour before the party, you can still whip these up before you leave, and arrive knowing you’ve brought a snack plate of which every crumb will be savoured.

This wonderful recipe by one of our readers makes enough for 12 larger scrolls, but if you’re catering for a party or need to make enough for multiple kids’ lunchboxes throughout the week, you can increase the amount of each ingredient to however much you think is right. The reason this recipe is so easy is because most of the ingredients amounts are based on your own judgement and preference! You might be after a stronger savoury flavour and opt for more vegemite, or prefer the cheesy taste better. Whichever is your preference for these delectable fun-size cheese and vegemite scrolls, they’re easy and fun to make regardless!

You can use the same method with many other toppings such as ham and cheese, cinnamon, sugar and butter, pizza sauce, the options are endless.

Do you have a better recipe for cheese and vegemite scrolls? Let us know in the comments!