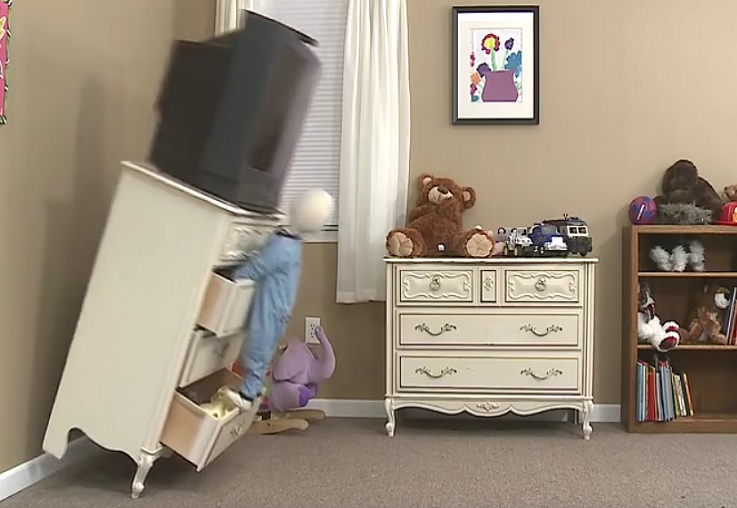 Have no regrets. Anchor and protect!

NSW Fair trading recently shared a video encouraging parents to take steps to prevent unstable furniture and TVs from toppling over and crushing a child.

Toppling furniture kills at least one child a year in Australia.

I am re-sharing the video below which originated in the US. It highlights how shockingly easy it is for a toddler to be killed while they innocently play around the home.

US figures show one child a fortnight dies from a falling TV, piece of furniture or appliance falling on top of them.

Each year in Australia around 300 children go to hospital as the result of being injured by a falling television, and that figure is continuing to rise.

If you have new furniture or a new TV on the wish list this Christmas. Make sure you install it with safety in mind.

Ashley Martin, public health project manager from RoSPA (Royal Society for the Prevention of Accidents) urges all stockists of safety equipment to make anti-tip straps easily available, so that parents can fit them to televisions and other bulky furniture in order to secure the items in an upright position.

“Safety straps can also be bought to secure televisions that are on bookshelves and on top of cupboards,” he says.

“As well as having a television set professionally installed, RoSPA also advises that free-standing, flat-screen televisions are placed on wide, stable manufacturers’ bases, which reduce the risk of the screen toppling forwards.

“Children and toddlers should be discouraged from pulling themselves up by holding on to a television set or furniture on which a television sits.

“They should also be kept out of the way of bulky, heavy goods as they are being moved.”

Why the rise in injuries and deaths?

Kidsafe suggests that the rise in the figure is linked to the introduction of flat-screen TVs, not because flat-screens are dangerous but because older (and heavier) televisions are being moved into bedrooms where they are more likely to be sitting on furniture that isn’t designed to take the weight or dimensions of a large, front-heavy TV.

You can keep your kids safe by:
•Using brackets fixed to the wall to mount or house your TV.
•Keep cords out of reach so kids can’t pull on them and risk pulling the television down on themselves.
•If you house your TV in or on a piece of furniture, ensure that it is purpose-built so that it is sturdy enough not to topple over.
•Test the stability of your television yourself – if you can push your TV over then your kids will be able too.

Has this video made you review how your furniture and appliances are secured at home? Please don’t take the risk.