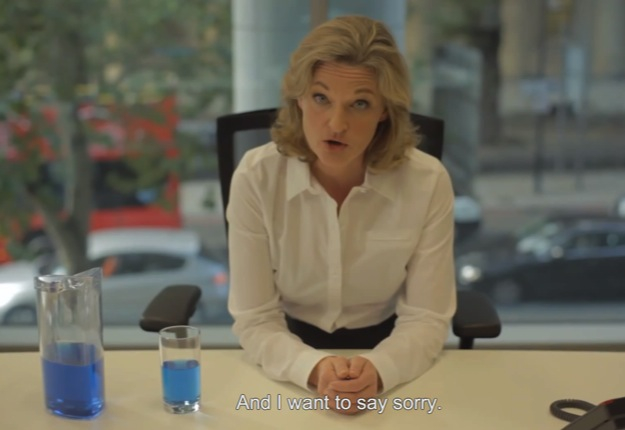 In our daily search today, we came across a very funny interlude between two parties – Party A was a man.  Richard.  Who according to his post on the Bodyform (Party B) facebook page, had lived his life under the impression that a woman’s ‘period’ was a ‘happy period’!  A time of joy, freedom, running on the beach, blue water and lots of smiles … 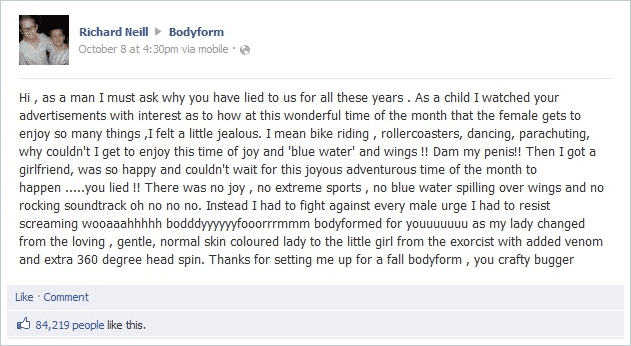 From the 84,219 likes his post has received, it’s clearly entertaining the masses!  We think it’s funny and whether or not it’s a genuine post, it does make light of all those ads we’ve all seen for years and years and years about how, once you’re wearing a pad or have popped in a tampon, you can suddenly ride horses, do handstands on the beach, wear the whitest of whites and basically have the time of your life.

The reality, as we all know only too well, is that “that time of the month” for most women is a time we’d rather avoid at all costs.  There is no hilarity, no sudden bursts of energy and certainly no new-found gymnastic abilities just because we have our period!

Wonderfully, Bodyform delighted in responding to Richard’s post on their facebook page.  They could have hidden, deleted or simply ignored it – hoping it would wash to the generally unseen section of “Posts by others” as quickly as possible.  Instead, they set cameras rolling and had Bodyform CEO Caroline Williams respond to Richard.

We thinks it’s fantastic, refreshing and downright hilarious.  See what you think …

Well done Bodyform.  We, like many others who’ve posted since on your wall, think YOU ROCK!

What do you think about all the hoo haa that goes on when it comes to advertising ‘feminine hygiene’ products?