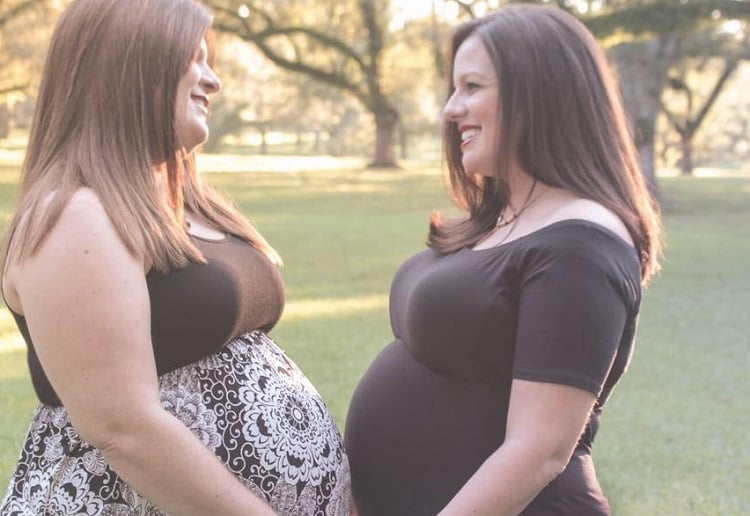 Anna and Renee McInarnay, 35 and 36, from Hattiesburg, Mississippi, US, both underwent IVF treatment, and were told they had just a 38 per cent chance of success because of their ages.

Renee had an even lower chance as she also had polycystic ovary syndrome (PCOS) and so neither believed that conception could be a ‘real possibility’.

The couple, who have been together for 18 years, said the news was a ‘miracle’ and went on to attend birthing classes together, even planning to welcome their little ones into the world on the same day.

Due to complications, they both needed c-sections after long labours and decided to give birth separately.

On Saturday October 13, Emma Reese was born to Renee. She weighed 7lb 13oz.

The couple say they have been criticised online for being pregnant at the same time – even though neither expected it.

However, they sat that they have received positive feedback and well wishes from people in their everyday lives.

The couple hope their story will offer hope to other families struggling to conceive.

Anna added: ‘The fortune we have had has laid heavily on our hearts, it’s not lost us that we had this amazing opportunity.

‘We want everyone trying to have a family to know that our hearts are with them.

‘We had an amazing experience where some people struggle for years and years.

‘Anyone who wants a family should be able to have a family through any means they can do.’

Congratulations to them all x