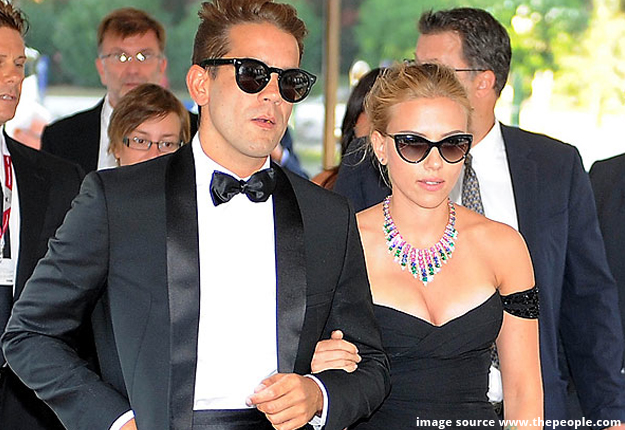 Bombshell Scarlett Johansson is engaged! The actress is giving marriage another go with journalist Romain Dauriac, who proposed about a month ago.

While promoting her new film Under the Skin at the Venice film Festival on Sept. 3, Johansson was squired by her tuxedo-clad 30-year-old fiancé and sported a whopping great diamond on her ring finger.

It will be the second wedding for the notoriously private actress, 28, whose two-year marriage to actor Ryan Reynolds ended in 2010 (he is now married to Blake Lively). “I continue to get to know myself better as I get older, and that helps me in my relationships,” she told Marie Claire’s May issue.

“I got married when I was young and it was incredibly romantic and I liked being married, actually,” she told Elle UK in January, but subsequently told French Elle about her determination to steer clear of her own industry. “Weddings are hard work. I married way too young, I wasn’t ready. You open your arms to someone you love and promise to share everything with him, it’s frightening,” she said in April. “But two actors together, it’s pure madness. Each is animated by the desire of success, the egos are too strong. Too many absences, silences. It’s really difficult to build something.”