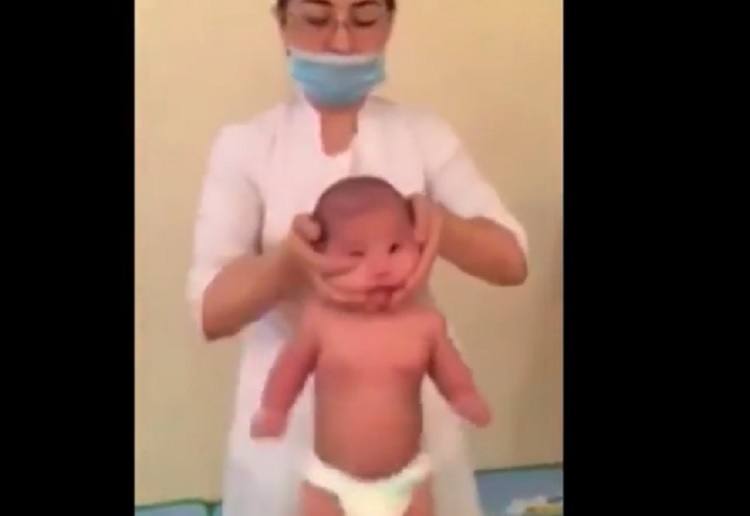 A shocking video shows a woman swing and flip a baby around by his arms and ankles for a baby “massage”.

Larissa Orynbasarovna was filmed performing the “treatment” earlier this year. The 35-year-old claims the frightening massage is healing for babies.

But experts in the UK have warned the baby boy is at risk of dislocating bones – and in the worst case damaging to his spinal cord.

Stuart Korth, of the Foundation of Paediatric Osteopathy, told The Sun: “This is a very concerning video. Some of the movements are acceptable but the more extreme ones risk dislocating his shoulders, or worst case causing damage to his spinal cord.”

He added: “The force that is being put on his neck could damage the spinal cord, that would be catastrophic.

“Parents must avoid these movements altogether.

“They must keep their babies moving, but common sense tells us this is too far.

“Gentle swinging is fine, but only when a baby’s neck and shoulders are properly supported.”

Larissa, who has been working as a professional certified masseur for 11 years, and even trains students, said she loves helping kids.

“I help children,” she said. “I’ve worked with so many babies over the years, many with disabilities like neck curl or crooked feet.

“My massage heals them.”

The massage sees a baby tossed and twisted around for ten to fifteen minutes.

The video, which was posted online, has sparked outrage amongst social media users.