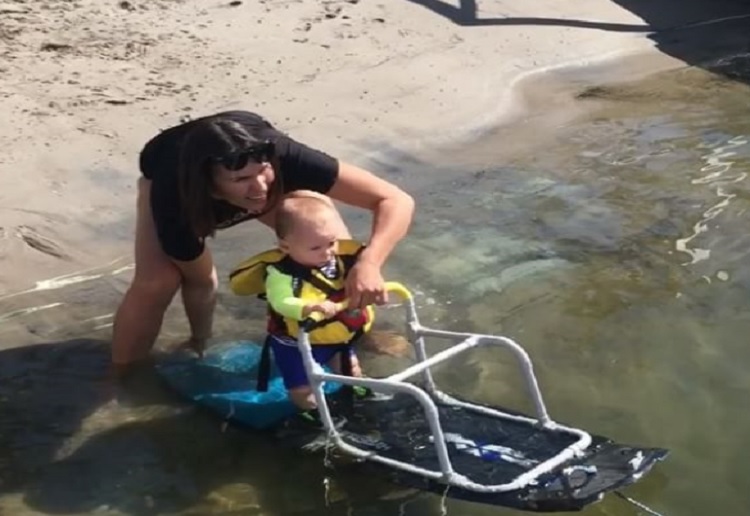 A six-month old baby from NSW has become the world’s youngest wakeboarder.

Parker ‘Parks’ Bryant may not be able to walk yet, but footage from Runaway Bay on the Gold Coast shows the toddler can hold his own behind the handlebars of a wakeboard.

‘He was loving it. He always laughing and having a whale a ball as soon as he got going,’ Mr Greenland told Daily Mail Australia.

He said Parker cruised about 500 metres along the bay’s calm waters with his parents Timothy and Karin Bryants, from Singleton in NSW.

Mr Bryant told Daily Mail Australia Parker has been power-boating since he was just two-weeks old.

‘He just lights up whenever he takes to the water, so we figured we would give him a crack.’

‘We’ve been teaching him balance and how to grip on tight from his backyard pool, so he knew exactly what he was doing,’ he said.

The vision shows the smiling baby gripping on tightly to the learner board as he carves it up.

Parker wore a life jacket and elastic shoes to ensure he was safe if he became separated from the boat – but Mr Bryant admitted they still held safety concerns.

‘There’s no plans to become a wakeboarding champion yet, but when Summer comes around we definitely plan to have another go.’