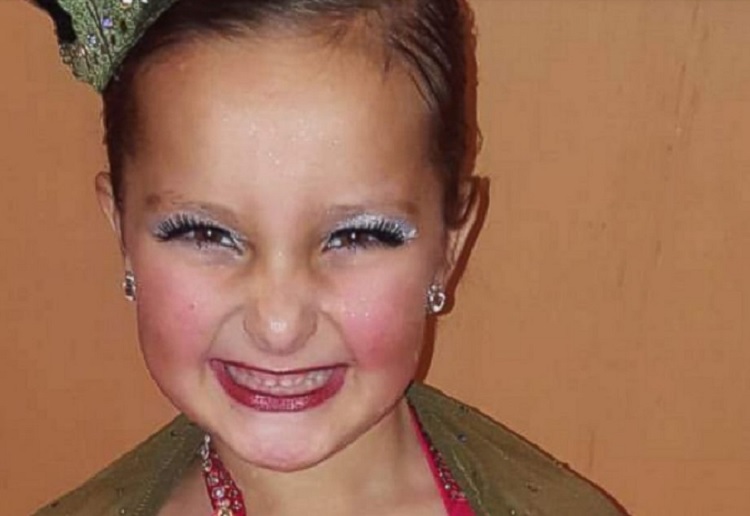 Young girl recovering from rare complication after strep throat led to a dangerous infection, which resulted in the amputation of one of her legs.

Tessa Puma, 6, from Ohio, was diagnosed with necrotizing fasciitis, an infection that is commonly called flesh-eating bacteria, which can spread quickly in the body.

Her father, Matt Puma, said doctors believe the dangerous infection was caused by bacteria from her strep throat.

Tessa was earlier diagnosed with strep throat and took antibiotics. But when she was struck with the flu, her parents noticed she was complaining of pain in her arms and legs. They took her to two hospitals before doctors diagnosed an additional problem: necrotizing fasciitis.

“They did some more tests and confirmed she had the flu and saw she had some kind of infection,” Mr Puma said. “She spent a couple of days in the hospital, and her leg got worse and worse.”

At one point, simply touching Tessa made her scream in pain. When doctors performed surgery to relieve swelling, they found extensive damage in her left leg as well as parts of her shoulder and back.

Necrotizing fasciitis can occur after bacteria from a strep or other bacterial infection migrates to the bloodstream and infects the fasciae, or membranes surrounding muscles and other internal organs. The infection can kill tissue as it spreads, causing serious complications that can require amputation or result in death.

In Tessa’s case, doctors believe the strep bacteria migrated to her bloodstream, causing the dangerous infection. When doctors could no longer find a pulse in her leg, they concluded she likely had too much dead tissue. To help her heal, they amputated her left leg from the knee down.

Mr Puma said the doctors told him, “If there was any kind of hope for her to live and survive, it’s going to be best to amputate her leg.”

Tessa is recovering at Akron Children’s Hospital but will need further surgery and additional portions of her left leg removed to help her survive. But her father said that she has a strong will and that he believes she will eventually return to what she loves: dancing.

“She’s very good-hearted,” Mr Puma told ABC News. “Whenever she puts her mind to something, she’s very determined. This isn’t going to set her back to her goals.”

How Streptococcal sore throat is spread

Streptococci are spread when an infected person talks, coughs or sneezes small droplets containing infectious agents into the air. The droplets in the air may be breathed in by those nearby. The droplets may contaminate hands or objects such as drinking cups or eating utensils. Sometimes spread occurs by eating contaminated food. Sometimes spread occurs by direct contact with infected wounds or skin sores.

Signs and symptoms via SA Health

Complications of this infection may include:

MoM shares her experience with Strep

I have suffered many, many, MANY bouts of “tonsillitis” since I was a young child. In my teen years, my then family GP, decided to put me on a course of antibiotics for six months to try and cure me once and for all.  Pffft yeah, true story. Don’t get me started on how my poor gut has suffered ever since.

My most recent bout of tonsillitis was diagnosed a couple of years ago now. (PLEASE no more!) I tried to fight the tell tale signs of the infection myself for a while to avoid yet another course of antibiotics. But in the end when my temperatures started to rise I decided I better visit the GP. A throat swab confirmed strep.

But while my throat was feeling better, what was happening to my body felt much worse.

After taking a few doses I began having what we thought was a reaction to the antibiotics. Itchy rash developing everywhere. After suffering similar reactions before (See previous poor gut statement) the doctor continued to change the meds I was prescribed and off I went.  But after a couple of different medications and no real improvement to the spots I was continuing to develop I was getting very frustrated. 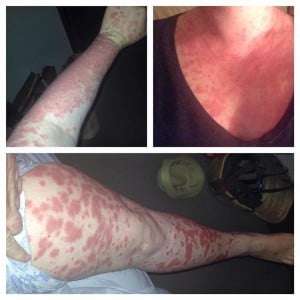 I actually ended up in Emergency as the itch and burning sensation became unbearable. After a few tests, that all came back clear, one of the nurses asked for permission to send a photo of my horrid rash to a dermatologist.  He diagnosed me on the spot with Psoriasis and I was sent away with a referral to see him the following week.

Guttate psoriasis is a type of psoriasis most commonly seen after a bacterial throat infection.  “Tear-drop” shaped red and slightly scaly plaques are usually seen scattered on the trunk, arms and legs.  It often affects children and young adults, and responds very well to treatment.

I had it literally from top to toe.  My scalp, to my toes. Thankfully not on my face. Which was some kind of miracle.  It itched and felt like it was burning nonstop.

It was Summer time and I hid myself away under long tops and trousers for the next six months while I underwent UV treatment to help heal my skin.

I have been told it is genetic and that I should watch my children whenever they get sore throats. Which horrified me!

We have all been advised to get antibiotics as soon as there is any sign of a sore throat. I hate that! I am really not a fan of medication since this episode. I am not convinced that the medication wasn’t the start of it all.

I still get really paranoid every time I feel unwell. I hope and pray I never have to go through it again.  And I truly feel for those people who deal with psoriasis ongoing.

I think the message from me is to NEVER ignore a sore throat, especially with a fever. Make sure you seek treatment as soon as possible to avoid a similar outcome.

Have you had a nasty experience with a throat infection or antibiotics?