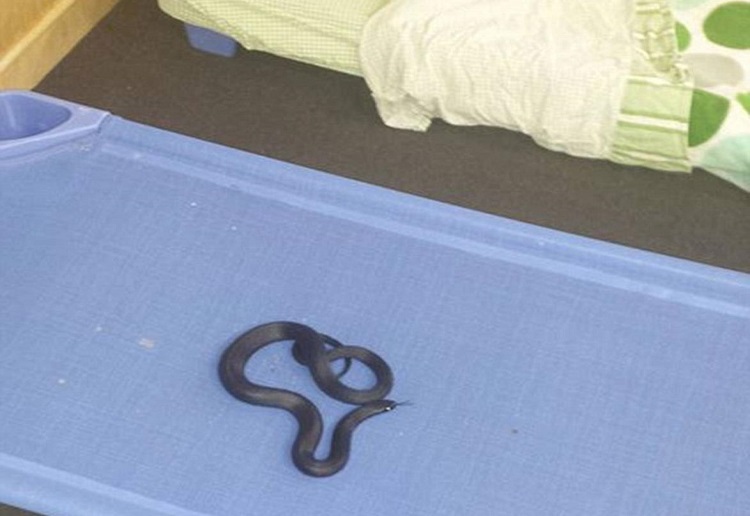 A carer at the centre on Victoria’s Mornington Peninsula found the red-bellied black snake curled up on the bed, which thankfully was not in use at the time.

The childcare worker got a nasty shock when she found a snake in a cot while she was trying to change the sheets.

She called a snake catcher, who arrived within 10 minutes and removed the reptile.

The snake wrangler has praised the efforts of a staff member at a Victorian childcare facility after she discovered a red bellied black snake in a child’s cot, which thankfully was not being used at the time.

Barry Goldsmith, of Snake Catcher Victoria, was able to arrive at the Mornington Peninsula centre within 10 minutes of being called, thanks in no small part, he says, to the carer’s calm response.

“Had a red belied blacksnake trying get some sleep in a cot at a child care center.  Staff were making the beds up when they came across the snake.
They handled the situation well, stepped back, shut the doors and laid towels along the crack at the door and called me. The snake was very relaxed and inoffensive and still lying on the bed where it was found.  30 minutes later the snake was in the bag and no one was hurt.  Fortunately the staff had enough common sense to know what to do. If they had tried to catch or kill the snake themselves, it could have been a lot worse outcome. Mr Goldsmith wrote on the company’s Facebook page.

Mr Goldsmith says snakes are often found in schools and the like.

“Kids are filthy and they attract mice,” he told the Daily Mail – though he added that he did not find any mice in the centre. It may have been as simple as a sandwich left lying around.

I can’t stop cringing at this story. Gives me the creeps.