Article So You’re Having An Iso Baby? You Deviant You! 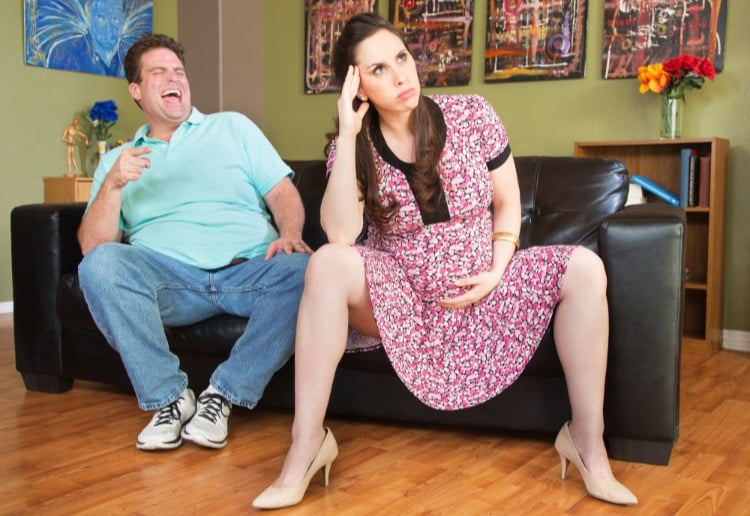 Deviating from the norm is hard! Not following suit with your fellow mother and blending in is hard! Telling everyone you’re pregnant with an iso baby after you already have SEVEN beautiful children is hard…Oh, the judgement!

A few months ago I shared an image on social media. It was one of those silly lists that goes around with random people’s names. This one was titled ‘Look who’s falling pregnant during isolation’… and my name was on it!

My name never makes it onto those lists so to me it was an amusing surprise! I thought it was funny and decided to share it just in case it was the only list my name would ever appear on.

I Thought It Was Hilarious!

The post received a very mixed reaction with a couple of my friends feeling concerned and recommending that I stay well away from my hubby just in case! Seven kids was already well over any reasonable person’s limit they reminded me and their worry over something as unreliable as a random made up chart was absolutely hilarious to me!

I mean how dependable could those lists of names be anyway? Surely there couldn’t be any actual scientific research behind it?

Well, the joke was on me, because at the time of sharing that list, I was already pregnant with baby number eight! Clearly my friends know me better than I know myself which is why the very mention of pregnancy drew such varied and strong reactions from them. They knew what a real possibility it could be for me.

What About A Name?

Their concern isn’t limited to just the sheer number of children I have either, these ladies who are stuck with me as a friend are even stressed when it comes to thinking about what I might possibly name a new baby!

With names like Lioness, Lionheart, Lion, Wolfgang and Rockefeller already in the mix, I too share in their worry about baby names. I mean where does one go from there when trying to select a name which will blend in with the rest of the siblings? Or would I not even try and alternatively just name the new baby something lovely and simple….like, perhaps, Tom?

Most people assume that my family is blended, not just because of the size, but because only one of the children actually resembles me. The rest are just my hubby’s clones and look absolutely identical to each other somehow. This actually makes things a lot easier sometimes because for some reason, no judgement is passed if you’re a blended family with a large tribe of children.

I suppose the difference is ‘choice’. When you’re part of a blended family it’s not as though you are personally responsible for how many little ones your spouse already has. Somehow strangers don’t judge the number of children there are in this instance. I’d say they might even admire the family even more for making it work so wonderfully!

BUT….if you intentionally decide to produce more than two kids you will be met by the craziest remarks ranging from whether your little ones were accidents to the classical ‘don’t you own a television?’ question, and now 2020 has brought us an all new, never before used, hilarious reaction to anyone’s pregnancy news – ‘so you’re having an iso baby?’ As though people had nothing better to do whilst in isolation!

Either way, I must admit I do love having pregnancy news being met with new responses, even if they are smothered with judgement and topped with sarcasm. It’s still like a breath of fresh air when you’ve already had every rude remark hurled at you previously over your last few pregnancies!

I don’t believe that the judgement of a person’s decision to have babies after they already have been blessed with two will ever cease to occur. It’s almost as though it’s the judgmental person’s God given right to make snide comments.

Maybe it’s just one of those things in life that we need to learn to accept. Pregnancy is not one of those topics which some people will choose to bite their tongue over. No, they more than likely will forget their parent’s solid advice to say nothing if they have nothing nice to say and give you an incredibly predictable piece of their mind.

So should mums of multiple kids develop a list of witty responses? Is that the answer? Meeting an uncomfortable situation with something equally or even more annoying?

Reserved for only my closest of friends, who’s friendship spans longer than thirty years, is perhaps the most awful reply to these pregnancy jokes. Whenever they have a crack at my pregnancy news, I always tell them that they’re just mad because I’m carrying their husband’s baby!

Oh, those words are AWFUL, and I don’t think the outcome would be good if said to just anyone. But when you’ve been friends for so long with girls who have absolutely wicked senses of humour, there are simply no boundaries when it comes to witty comebacks, absolutely anything goes!

Find The Funny Side!

Maybe this is the answer when it comes to dealing with these unwanted remarks on a new pregnancy – not just finding something hilarious to respond with, but also choosing to see the funny side of it all.

Congratulations to all expectant mothers reading this, regardless of what number baby this is for you! I hope you and your baby are both happy and healthy and that through it all you are able to maintain a good sense of humour, goodness knows you will need it if this is anything after pregnancy number two!

Are you or do you know anyone having an iso baby? What crazy remarks have you had when sharing pregnancy news? Tell us in the comments below.