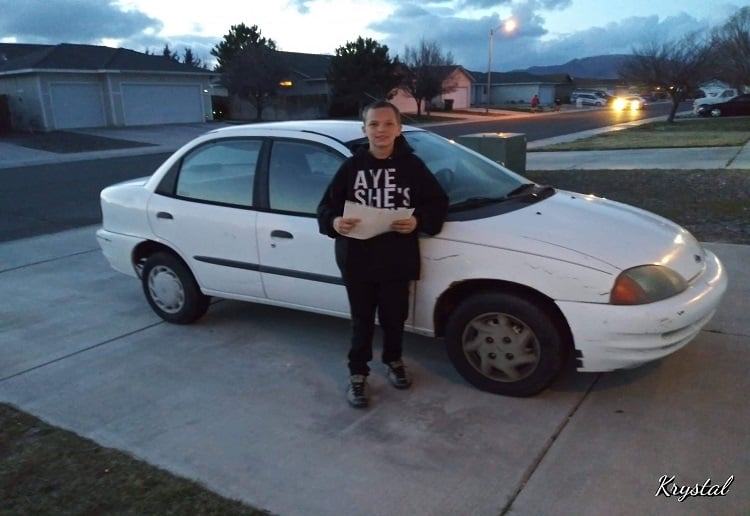 This teenage boy traded in his Xbox to earn money to surprise his mum with a new car.

William Preston, from Fernley, Nevada, knew that his single mother, Krystal Preston, was struggling to support him, his two siblings and their three dogs — and that having no easy means of transportation was making things more difficult.

So, after seeing a video on YouTube in which a child gifts his mother a car, William, 13, was inspired to do the same.

“I saw on YouTube where people get their mum a car and then surprise her with it,” William told KOLO. “I wanted to do that.”

The teenager then came across a woman’s Facebook post advertising her 1999 white Chevrolet Metro for sale at a low price and reached out to her to see if he could do housework to pay for the car or trade something in.

“It was really cheap so I asked her if I could trade it or earn it, and at first she said no and after she thought about it, then she said ‘yes’,” he said. So he traded his Xbox and worked off the rest.

When William first told his mum she didn’t believe him.

Krystal said her son had been asking her random questions about car parts, but she didn’t connect the dots until she saw the car for herself.

“I can’t even express it, like there’s no words that can express my gratitude and how proud I am.”

“At my low point, here comes my son,” the mother-of-three said. “Everybody goes through rough patches in their life, but there’s good that can come from any situation as long as somebody with a heart does it.”

Krystal also expressed gratitude for her son in a Facebook post that has gone viral and been shared nearly two thousand times and attracted over 7,000 reactions.

“I am so proud of my son. He is such a good kid. He may have his days but OMG what 13-year-old kid do you know that buys his mum a car … William I love you son and thank you.”