I love my Thermomix. I bought one of the earlier versions over 7 years ago and it’s still going strong. So for me, it’s been worth the investment over and over again. But I totally get that paying over 2-grand for a cult-ish kitchen appliance is hard to justify. That’s why the Aldi “Thermomix” fake is super popular.

The Aldi version of the kitchen super-machine is back as a Special Buy on 13 March at the cut-down price of only $299, which is a whopping $1,970 cheaper than the latest authentic Thermomix.

Wow, quite the package and certainly value of money!

The big difference this year compared to previous years is that the latest Aldi ‘Thermomix’ dupe is now manufactured by Stirling, instead of Mistral.

“This one is a different brand than normal for the ones sold by ALDI. Normally they are Mistral,” one observant shopper noted on the Aldi Mums Facebook Page.

“This one is a Sterling brand so will be very basic I think,” another shopper said.

While the price-tag of the Stirling model remains the same as last year’s Mistral machine, the main difference is the motor (the newer one is 700W compared to the 800W motor on the Mistral version).

However, this is offset by a bigger bowl (the 3.5L one is significantly bigger than the 2.2L bowl of the Mistral machine) and a more powerful heating capacity (1200W compared to 1000W in the Mistral Thermocooker). 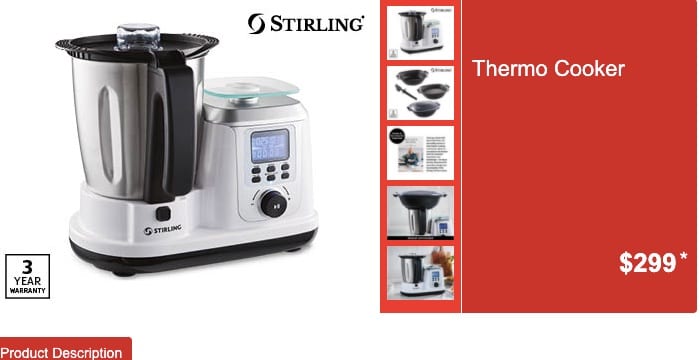 Many Aldi consumers are really excited about the return of the Aldi Thermomix version.

“I have bought 2 ‘fake thermomixes’. 8 years on and both going strong and cost less than half the thermomix. I cannot justify the price of a thermomix,” said one shopper.

“My daughter has this Aldi one and loves it,” said another.

“I have this and absolutely LOVE it! It’s almost exactly the same as the Thermomix!!!” exclaimed another fan.

“We got the mistral machine last year in April and I use it for everything!”

“I have the previous ALDI model and it is fantastic.. managed to break a piece off one of the attachments and they just replaced the whole lot. Can’t fault it – love it. Am sure this new version will be just as good if not better.”

But many are just not convinced that it’s a worthy buy.

“Returned mine to Aldi in the last round. Except for price, it doesn’t hold a candle to a Thermomix. Thought I would be happy with a copy but, no! Noisy, lower cooking temp to a Thermi, not as versatile. Guess I’ll just have to keep borrowing my daughters Thermi,” admitted another shopper.

BONUS TIP: Aldi’s special buys on the same day, also includes a dishwasher for only $349 and a 34-bottle wine cooler for $279.

Are you keen to buy an Aldi Thermomix lookalike? Tell us in the comments below.