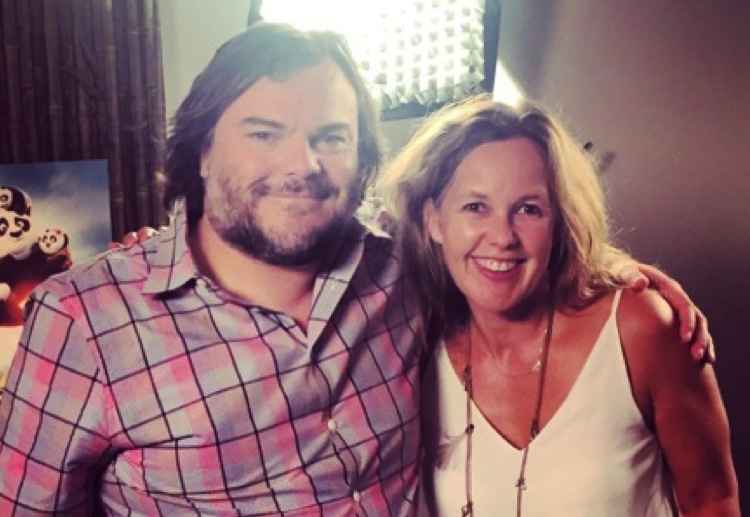 You always like to think if you meet someone famous, especially a famous comedian, you’ll be the one who asks that funny/insightful question that makes them say, “You know what, that’s the funniest/most insightful question I’ve ever been asked”. So with an opportunity to interview Jack Black about Kung Fu Panda 3 which is out now on iTunes and on Blu-ray & DVD on July 6, I thought, “this is my moment to shine, this could be my eight minutes of fame”.

In the build up to the interview I was worryingly relaxed. I’d done my research, I’d taken my nine-year old son Smith to see the movie, I had quotes, I had insightful questions, I even had a funny one, and because you never know if the person you’re interviewing is going to give monosyllabic answers, I had a time killing game. A good interviewer is always prepared, right?

Turning up on the day, I headed to the bar of the hotel where the interview was to take place, which was to be our ‘green room’. For some reason, call me naive, I imagined the room would be full of others like me – middle aged mum’s of three, known only by friends and family, with carefully researched questions.

Instead I entered a room full of Australia’s media darlings also waiting to interview Jack. Amanda Keller was holding court with radio jocks, Rove and Sam sat at the table beside me (along with her brother and his girlfriend I’d realised later after I’d Instagram-stalked her). Everyone knew everyone, and they were all air kissing and ‘darling this’ and ‘darling that’. If it were possibly to sit any lower in my seat I would have been on the floor as I slunk down trying to look incredibly busy and important (on Facebook on my phone).

I started listening in. ”Lets tell him how we do ‘chittychitty chat chat”, “I’m going to get him to do a karate chop!” “YES!!” There was little mention of insightful, well-researched questions. Just fluffy ones. What to do? Should I leap straight to my game or my funny question? The nerves kicked in big time. I had read this wrong. I had prepared wrong – my memo to myself wasn’t the same as the others.

I felt as if my elbow was grabbed and swiftly guided along corridors of the fancy hotel, but I may have imagined this. We stood outside a door and in hushed tones I was briefed, then the door opened and I was pushed inside the room coming face to face with Jack Black. (I may also have imagined the pushing part).

Being naïve and inexperienced-at-meeting-Hollywood-stars I’d also imagined that it would be just the two of us having a little chin wag, maybe with his P.A. Instead there were five extras in the tiny room for our intimate 8-minute catch-up, along with recording equipment, cameras and many clipboards. I lost my ability to breathe at this point.

“Don’t say anything stupid and don’t talk about yourself”, I told myself before I immediately started talking about myself and other stupid stuff. “And don’t tell him you’re nervous.” “Oh I’m so nervous, I’ve never done an interview like this”, I believe I said.

But then the sweetest man in the world called Jack Black, started chatting with me and calming me down. “I took my nine-year old son to see Kung Fu Panda 3 and he loved it!” I rambled.

“Oh I have a nine-year old too, what’s your son’s name?” he asked me. “Smith!” I replied. “Well Smith and my son Sammy should totally get together for a Skype play date,” insisted Jack Black to me about my boy. “Oh yes TOTALLY.’ I gushed, before launching into my insightful, well-researched questions.

The rest of the interview was a blur as it was slashed to five minutes thanks to Rove and Sam and their ‘chitty chitty chat chat’ questions. I rambled awkwardly on blissfully unaware as an important-looking director furiously motioned for me to finish up causing me to say ‘evolve’ three times in one sentence and confuse us all. When we posed for a prized selfie, the well-practiced Jack actually didn’t touch me at any time as I hugged him cozily. Which is actually quite tricky – try it.

And, even though the Skype playdate has never materialized YET, what I can tell you is that Jack Black is every bit as sweet and funny and genuine as you think he’s going to be. And if that’s not a reason to plonk yourself down on the lounge with your kids, a bucket of popcorn and Kung Fu Panda 3 on DVD these school holidays then I don’t know what is.