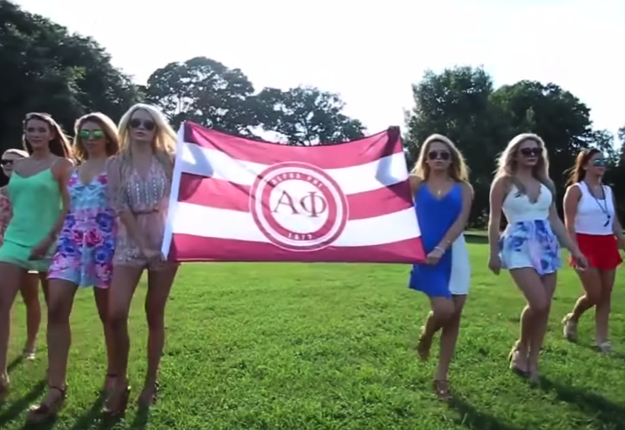 This sorority video is receiving a HEAP of criticism, and it’s easy to see why.

Feminism has taken a backwards step thanks to the recruitment video from the Alabama Alpha Phi sorority. The video was removed from YouTube on Sunday after a scathing piece was published by A.L. Bailey who labelled the video ‘unempowering’.

Here it is so you can see it for yourself, but be warned, you cannot unsee it.

The piece by A.L. Bailey, which caused the sorority to shut down their Tumblr and Twitter accounts, does not hold back, saying:

“No, it’s not a slick Playboy Playmate or Girls Gone Wild video. It’s a sorority recruiting tool gaining on 500,000 views in its first week on YouTube. It’s a parade of white girls and blonde hair dye, coordinated clothing, bikinis and daisy dukes, glitter and kisses, bouncing bodies, euphoric hand-holding and hugging, gratuitous booty shots, and matching aviator sunglasses. It’s all so racially and aesthetically homogeneous and forced, so hyper-feminine, so reductive and objectifying, so Stepford Wives: College Edition. It’s all so … unempowering”

It’s certainly something I don’t ever want my daughters to aspire to, I want them to be strong and powerful, not to feel like they have to look and act a certain way to gain attention.

What do you think? SHARE your thoughts with us in the comments below.