Article This Baby Boy Has the Best Hair Ever! 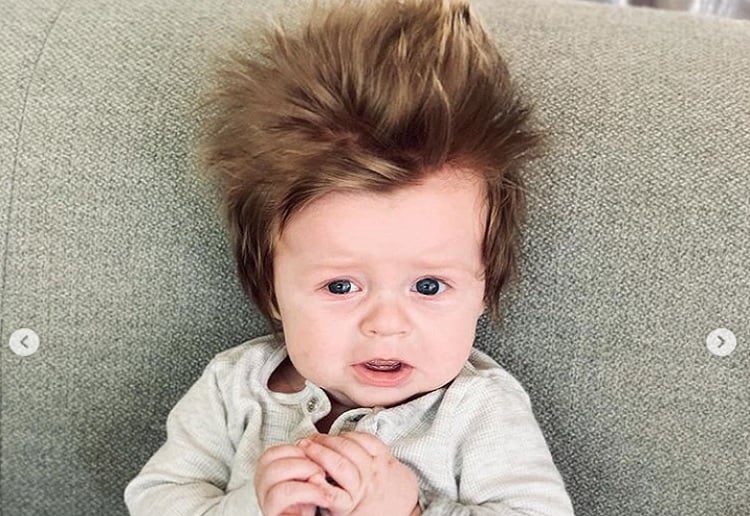 Four-month-old baby boy from Perth has the most luscious hair you will ever see.

Boston was born with a full head of hair, and the delivery room thought he looked like a little troll doll.

Boston’s parents Steve and Tara were quite shocked when he came out of the delivery room with a full head of hair.

“I wasn’t looking at the start, but the nurse screamed out, and I had a look and went, wow!” Steve said.

“I think it’s all my side. I think he’s from a long line of bouffants. So hopefully he can keep it going.”

His hair has continued to grow for four months, and so far, it hasn’t shown any signs of falling out.

Tara said she only used water with her first son’s hair, but that’s just not an option for Boston.

“Boston’s hair gets too oily by the end of the day, so we’ve been using a 2-in-1 junior shampoo and conditioner,” Tara said.

He won’t be getting a haircut anytime soon either.

“I feel like it’s his special gift, and I think I’d be a bad mum to get rid of that so soon,” Tara said.

“I have been tying it up a little bit, but then people go, what a beautiful big girl you’ve got!”

“I always put up photos on Instagram of my boys, and one particular photo got a lot of interest,” Tara said.

“Suddenly my inbox was full of messages from people in China and New York, with people wanting to share his photos.”

I think little Boston even puts Baby Chanco to shame. Baby Chanco has more than 397,000 Instagram followers thanks to her amazing hair!

Really wanted to turn this photo into big hair meme… but thought maybe that would be cruel of me as a mother lol ???? #8weeksold #notstyled #iwokeuplikethis ???????? #bostonsimich

Big stress of #breastfeeding is SUPPLY! I know when Boston is fed well he sleeps well???? I am totally in love with Perth brand @milkandnourish treats & their booster capsules ???? The ones I am eating today are white chocolate???? & macadamia nut ???? Get 10% off with code MILK10 #supportlocal #babyboy #14weeksold ???????? #bostonsimich #babyboston A post shared by Tara Mia Simich (@tarasimich) on Mar 17, 2019 at 10:05pm PDT