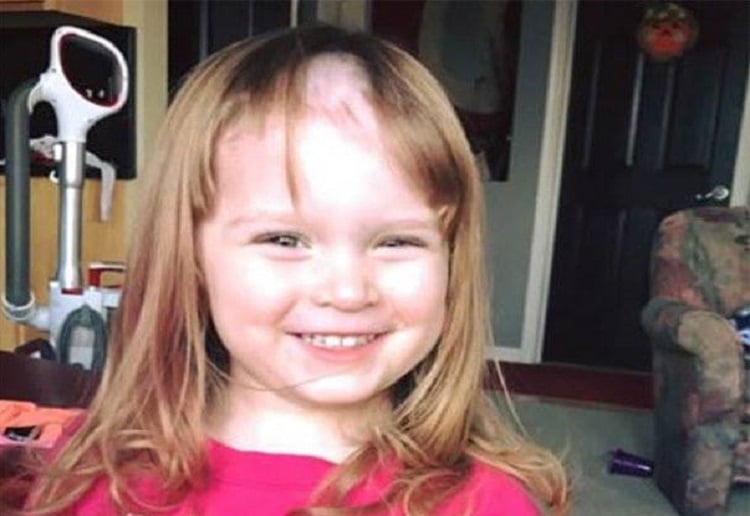 Mum shares how she over-reacted when her daughter cut a chunk out of her hair.

The mum shared, “Disaster! My daughter has cut her own hair (badly!) While I was feeding her baby brother, she pushed a stool up to the drawer, took out the scissors and decided to play hairdresser and cut a huge chunk out of her fringe (the pic isn’t her but it looks pretty much exactly the same- EEEK!!).

“I freaked out completely but regretted it later. In the whole scheme of things, is it really that important – hair does grow back! But still…..

Rachel shared, “Painted herself green then proudly said “look mum, I’m shrek”. Let me be clear, it wasn’t just her face. She was naked. The whole body bum cheeks and all!”

Samantha reassured us, “I am a hairdresser and it seems that kids just love to cut their own hair , I see it at least twice a month , you can move some other hair over it and make her a side path using some clips to hold it down.”

Penny shared, “My daughter did this too. Not that short though. It’s only hair, it grows back. We used pretty clips and pulled it over to the side when we could be bothered. When we couldn’t be bothered she looked like a cockatoo.”

Sarah shared, “My son found some scissors and gave his sister her first haircut (just over a year ago)… I yelled, and I sat on her bedroom floor picking up the hair crying.”

Jess shared, “My son one day got to the electric razor and shaved a whole line right down the middle of his head (think reverse Mohawk hahaha) I think I died when I saw him.”

May shared, “Mine decided to shave a bit of both her eyebrows aged almost 4 and then at age 7 decided to cut herself a fringe.. shes turning 8 in June and I’m still waiting for it to grow out lol”

Vanessa wrote, “My 3 year old gave herself a mullet. As far as mullets go it was really good, she cut all the front of her hair quite evenly. Possibly a future hairdresser. I made some tie up headbands to cover most of the damage and she got called Billy-Rae until it grew back.”

LaToya shared, “Our girl, Honey, thought peanut butter could make her invisible. Need I say it did not work.”

It really is only hair!

One mum shares on Totally the Bomb that as frustrating as it is – it is actually a good thing.

Jamie Harrington writes, “Not that you want your child cutting her own hair all the time, but this is (believe it or not) a sign of autonomy.

“It means your child is starting to see herself separate from you.

She adds, “It might have been just an experiment, or maybe she was bored, but think about this: up until this moment, every single decision about your child’s body has been up to you.

“From teaching her to hold a spoon, how to walk, how to potty, even (most likely) whether or not she can suck her own thumb.

“What’s the worst that’s happened after all? It’s hair…it’ll grow back.

Jamie adds, “Remember this moment…because once the teenage years hit you’re going to WISH you could come back here!”

Has your child done something crazy/naughty/dangerous that’s pushed you to breaking point?