Article This nasty note begs the question…. would you do this to a friend? 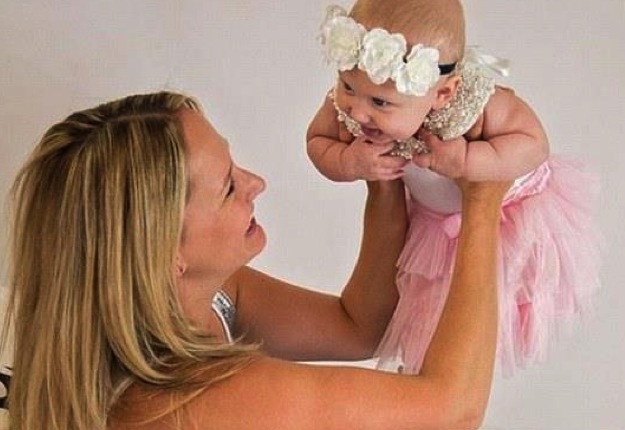 When new mum Jade Ruthven, 33, from Perth started posting images and updates of her new daughter Addison on social media, she no doubt thought it was the perfect way of sharing Addy’s progress with her family and friends.

Because it is isn’t it?

However, what she wouldn’t have expected was to receive a cruel and venomous ANONYMOUS letter from a so-called group of friends, complaining about her supposed ‘over sharing’ of Addy online. 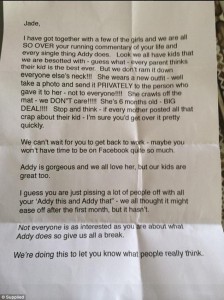 Can you believe this letter was actually printed and hand delivered to her letterbox!

With most trolls, they hide behind anonymous avatars in vast social media arenas such as Twitter. But for Jade, her trolling was even more real, because it was hand delivered to her letterbox. And only friends know where you live right?

Can you just imagine how betrayed you’d feel by this undeniable bullying. How defensive you’d be of your beautiful and innocent child and how incredibly angry you’d be at not only the malice and cruelty of the note but also the cowardice of that person for not stepping up and identifying themselves? What’s wrong with actually just saying what you feel in person?

Since when is it ok for friends to troll friends. Jade would say ‘never’ and she’d be right.

Has social media empowered many to treat others like we’d never, ever treat them in person? Hell yes! Unfortunately it’s created a ‘virtual shield’ to stand behind for those malicious bullies while they throw stones. They can hide behind their anonymity. It’s easier to be cruel than ever before. Fact.

As friends, we have a responsibility and well, a duty of care, to own that title and actually be a friend.

Social media has been a pleasant platform to do that to a degree, and is redefining friendships. We ‘like’ posts often, we ‘share’ when something has tickled our fancy and we comment widely and for the majority of us, it’s always well meaning and kind and we like being part of a ‘community’. One of my best friends, I met online, yet we went to that ‘next level’ and now catch up in person regularly and often have ‘Skype dates’ so we can enjoy each others company and our friendship, in real time.

Social media will never replace the face-to-face connection that a friendship needs.

If gentle words of advice are helpful, then say them privately and in person. Pick up the phone, pop over for a coffee, or if you must drop a carefully worded email – signed that is. It’s so much more appropriate and more humane, than a public shaming. And no doubt will have a bigger impact than online bullying.

In Jade’s case, her ‘friends’ clearly didn’t know who they were dealing with. There has been an international outpouring of support for Jade and Addy. And it’s starting important conversations about when friends actually aren’t friends and how we should be treating each other with respect and care, not vitriol and abuse.

Luckily, as Jade told the Daily Mail, she is a strong and healthy person. But for many first time mums, they may feel alone or struggle with the challenges of motherhood, and need their friendships more than ever before. For these women, the consequences of abuse like this could be far reaching.

It’s at times like this that those who wrote this abusive letter to Jade, and others just like them, need to remember the ethos of the Golden Rule – treat others how you’d like them to treat you. It’s simple really. Just be nice to each other, ok?

Have you ever been bullied by a so-called friend? Would you ever treat a friend like this? SHARE your thoughts with us in the comments below.