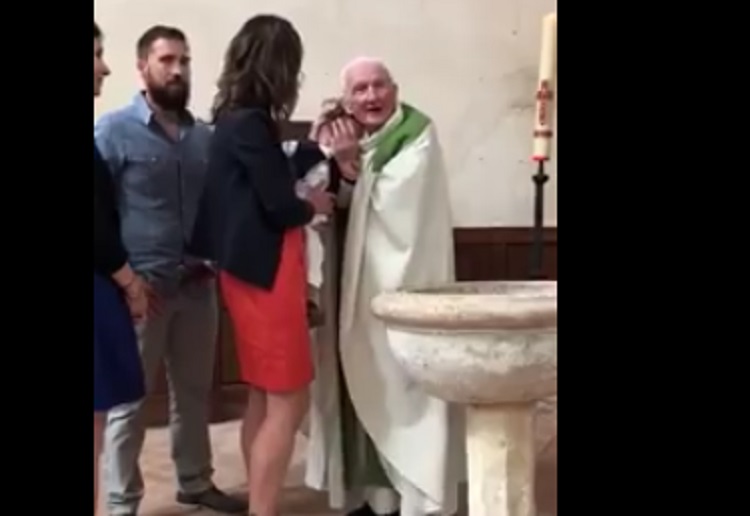 Warning: Distressing content.  This video made my blood run cold.

A video of a priest choking, hitting and trying to smoother a babies cries during his baptism has people outraged.

It is truly horrifying to watch so be warned!

So far the video has attracted over 45,000 views and over 1500 shares just on Facebook.

One comment read, “Not only did he slap the kid, he covered the kid’s face with his hand. Luckily the Dad pulled the kid away. Looks like the mom checked out.”

Another said, “That man had evil and hate in his face as he hit that child. How dare he. Disgusting.”

“They should have removed the child as soon as he slapped the baby then knocked him out that’s what I’d do if that was my child.”

“The poor little thing is traumatised! Good on the father coming in and taking the him away!!!”

“If that was my child, that priest would have been flat on his arse , and then on a stretcher on his way to hospital.”

“I cant believe what I just seen!”

“Oh my gosh. He was also suffocating him and hit him. I would have pulled him away straight away.”

The French priest who slapped a crying baby on the face during his baptism has been identified and suspended.

Father Jacques Lacroix has been removed from all church activities, according to a statement released by Meaux Dioceses in France on Friday, June 22.

“Since June 21, a video circulates in the press and social networks on which we can see a priest (89 years), celebrate the baptism of a child in Seine-et-Marne,” the statement reads. “This short video is an excerpt from the celebration which the baby cries a lot. The elderly priest loses his temper and slaps the child. Aware of this inappropriate gesture, the priest apologized to the family at the end of the baptism.”

The statement continues: “On Friday, June 22, Bishop Nahmias, Bishop of Meaux, took provisional measures to ensure that the priest was suspended from all baptism and marriage celebrations. These measures also require him not to intervene on the Collegiate Church of Champeaux now and to celebrate masses only at the express request of the parish priest.”

Last month we shared how a Greek Orthodox priest  come under fire over a video showing him forcefully plunging a baby into a basin of water. See that here.