Article To pierce or not to pierce?

Lisa from No Excuses tells us about her decision on whether or not to pierce her child’s ears. 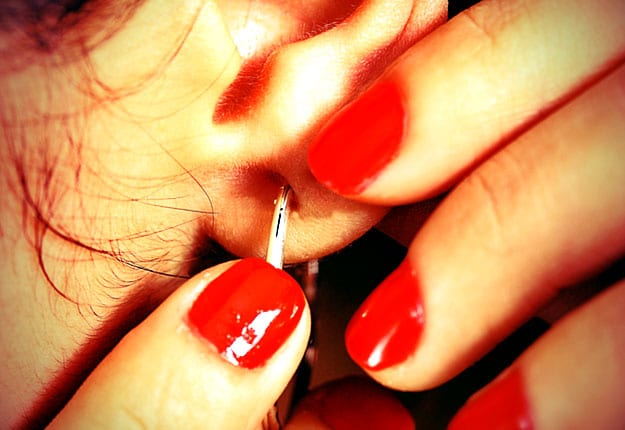 It has begun, my girls are growing up and no longer want to play with dolls, dress-ups and be princesses.  Today begins a new journey; today my eldest daughter (and the big sister) has led the way for the others; today she had her ears pierced for her 14th birthday.

For years I decided I was not going to allow ear piercings until the age of 16; mainly due to the fact that I had mine done when I was 10 years old, my sister was only 7 (too young in my book).  I remember the amount of trouble my mother had with the infections, swollen and even bloody earlobes.  My sister was far worse than I and since then I decided no girl of mine will have her ears pierced until she is old enough to care for them herself.

Ear piercings go all the way back to B.C. in history, and today it is a common practise not only to pierce the earlobes, but all parts of the body.  Europeans tend to pierce their baby daughters at the very early age of 3 months old (or earlier); having an Italian mother, I recall my cousins with these HUGE earrings “sticking out like a sore thumb” on this little baby.  I am sure my mother must have been the odd one out because her daughters had not been done yet!

So what made me change my view?  After all I did say NOT until SWEET SIXTEEN!

My main reason for changing my mind was due to maturity. Seeing my eldest daughter is already a ‘woman’ and quite capable of looking after herself; I then decided that if she does get an infection from her earrings, she should be able to deal with it accordingly.

My other reason is that I have also been taking her ‘shopping with mum’ lately and we always go to the jewellery section in the department stores.  A lot of her friends (not all though) already have their ears pierced and she often buys them gifts for birthdays or Christmas.  So I thought perhaps it was time to change my views (her dad said it was alright too) hence present shopping will be so much easier now as well!

Of course, my daughter was extremely excited, when I told her weeks ago that she could have them done; however I didn’t tell her we were actually getting them done on our recent shopping trip (yesterday). We did a girly shop and I brought along her 11yr old sister and 13yr old cousin (who already has her ears pierced).  We went the day before her birthday and I headed straight to the pharmacy/chemist and asked for an appointment. Unfortunately, we had to come back at a certain time, so my daughter was a little scared and worried about it all ~ but excited at the same time.

Her cousin was giving her some horror stories and I am sure she was having second thoughts.  However, in she went after 10 minutes of picking out her first stud earrings that will need to stay put for the next 6 weeks.

I must admit though, I was a little nervous for her too; it had been over 30 years since I had mine done and I wasn’t sure how she would reacted to the ‘punch’ in the ears. I do remember getting mine done, however not the painful part.  Fortunately, she was able to have both ears done at once and the ladies were very encouraging too.

As for her spectators; myself, my niece and 11yr old daughter, we all watched while my brave girl was put through a couple of seconds of torture.  She was a little glassy eyed at first, but then smiles all round.

This proud mum took photos; the cousin patted her on the back and the little sister said “mum, can I have mine done too”?!  What do you think I said?